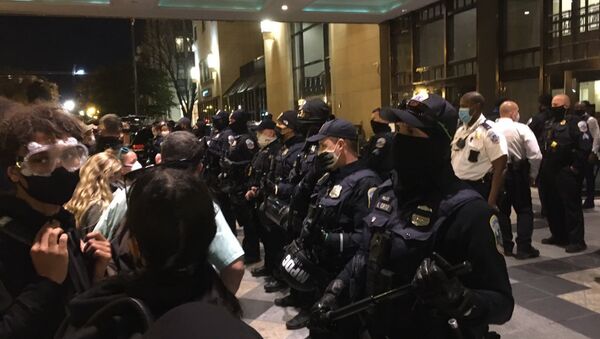 Asya Geydarova
Editor
All materialsWrite to the author
WASHINGTON (Sputnik) - Activists chased out US President Donald Trump’s supporters in Washington, DC, and besieged at least one downtown hotel hosting them, prompting police to step in and use pepper spray to forcefully scatter the crowd, a Sputnik correspondent reports.

Thousands rallied on Saturday in the country’s capital to demand four more years for the Republican incumbent and echo his claims that the election victory was stolen from him in a massive fraud scheme.

The rally was mostly peaceful, but violent altercations began when anti-Trump activists gathered several hundred feet away from the White House and harassed scattered groups of Trump supporters returning to their hotels.

Video from the scene in Washington, DC, where activists chase out Trump supporters https://t.co/8I1I1gfWT1 pic.twitter.com/AF60aTWVbO

A Sputnik reporter saw a flag being seized from a Trump supporter, families with kids being chased out, a red MAGA ["Make America Great Again," Trump’s motto] cap torn off a man’s head. Police deployed in large numbers nearby moved to break up clashes, salvage Trump supporters, and occasionally arrest their most violent attackers.

Police stepping in during protests in Washington, DC https://t.co/8I1I1gfWT1 pic.twitter.com/HOCVCAPwBm

Law enforcement officers also moved to protect Capital Hilton after the downtown hotel hosting a group of Trump supporters was besieged by a violent crowd.

Police forcefully scatter the crowd to protect The Capital Hilton, which is hosting a number of Trump’s supporters https://t.co/8I1I1gfWT1 pic.twitter.com/eR8bNWd8PO

Police used pepper spray on protesters and force the line back up 16th St. pic.twitter.com/m6BP3HB6Dg

Another Saturday footage depicted what looked like ransacking of a street stall with pro-Trump merchandise, a firework being hurled at people dining in a restaurant, a man being knocked down by a mob and kicked multiple times, and an elderly Trump supporter on a bicycle being beaten and having some kind of liquid poured on him.

Counter-protesters were also captured burning Trump hats and flags that they apparently grabbed from MAGA protesters.

Several arrests were made during the altercation. A block away two lines of police separated Trump’s fans and haters, who are gradually leaving the area.

DC brings out the storm troopers to handle the violence tonight. pic.twitter.com/NYVPRRaSBi

Here is a pro Trump marcher taking a knife from an apprehended BLM female protester. pic.twitter.com/8NLwGy6uCC

Americans gathered for a massive rally at the US Capitol on Saturday to demand four more years for President Trump in office. The citizens were first seen at the Trump Hotel before they marched to the Capitol and Supreme Court. The demonstration was peaceful, with citizens chanting "We Want Trump" and "Stop the Steal", referring to the possible fraud and irregularities Trump says have taken place during this year's election. Trump points out that preliminary results were showing him winning in several states before they changed to show Joe Biden ahead, prompting POTUS to believe that the election was rigged by Democrats using false ballots, machine system glitches, and even ballots cast by deceased voters.

Police closed a large part of the city due to fears counter-protesters could show up, bringing a possibility of an altercation between them and Trump supporters. Already by the afternoon, there were a few incidents, as counter-protesters were seen burning Trump items they snatched from the president's supporters and provoking them, both vocally and physically, so that they would engage in a scuffle.