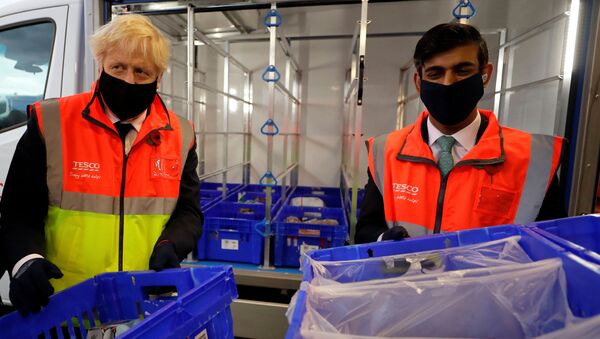 James Tweedie
All materialsWrite to the author
The UK has insisted it will be a sovereign nation and will not bow to European Union demands for access to fishing waters and regulatory alignment when the Brexit transition period ends on December 31.

Former Brexit Minister David Jones, chair of the powerful European Research Group of Eurosceptic MPs, urged Johnson to "remain firm" in the run-up to Thursday's deadline for trade talks between London and Brussels to yield a draft agreement, the Express reported on Sunday.

He said the French president's stubborn insistence on continued fishing in British waters would scupper tariff-free access for the £374 billion (€417 billion) annual EU exports to the UK - unless he admits he made promises he couldn't keep.

Britain "will be an independent coastal state which means Macron will have to eat humble pie and admit that he’s over-promised to the French fishermen," Jones said. "Either they come to an agreement with us – in which case French fishermen will not have the same access to UK waters – or there is no deal in which case they don’t have any access to UK waters. He has really, I’m afraid, painted himself into a corner by over-promising because he was so bellicose about the whole thing.”

Government sources told the Sunday Times Brussels is demanding British fishermen accept a "derisory" quota of less than a fifth of the catch from the UK's thousand-mile-long maritime exclusive economic zone in return for tariff-dree trade with the EU.

“The figure is in the teens, percentage wise. It’s ridiculous,” one official confided. Another insisted Johnson was determined not to repeat the mistakes of former Tory PM Edward Heath, who took the UK into the European Economic Community and its and Common Fisheries Policy in 1973, saying: “He has been going around all week saying that he’s not prepared to be the new Ted Heath.”

Friday's departure from Downing Street of Johnson's key pro-Brexit advisor Dominic Cummings has unnerved among Eurosceptics, who think UK trade negotiator Lord David Frost might abandon the UK's "red lines" - control over fish stocks in British waters and not being tied to EU regulations which Westminster no longer has a say in.

“If a deal can’t be done on terms that are acceptable to Britain they we must face up to that," Hayes said. "There must be no compromise of our core principles and there must be no toning down of our red lines. Our red lines must not be made pink.”

He urged Brussels to accept that the UK no longer wants to be part of its federalist "nightmare".

“Coming to an agreement is going to be challenging for all concerned and painful for those in Europe that are still wedded to the fading prospect of federalism which they see as a dream and we see as a nightmare," Hayes said. "But I still think there’s a chance that common sense may prevail."

North West Leicestershire MP Andrew Bridgen said Cummings could bow out with honour now the UK had left the EU, even though a trade deal was still on the table. “When the dragon is slain, you don’t need a dragonslayer anymore,” he said.

Bridgen said Brussels's fear of British competition was behind its insistence on a regulatory "level playing field".

“You’ve got a trading block that is scared to do a free trade deal with their biggest customer because a free, independent, sovereign Britain trading with the rest of the world will economically out-perform them and they know it," Birdgen said. "That’s why we’ve got to hold our nerve because there might be a little bit of short-term disruption while we readjust but a bad treaty with the EU will be forever.”

“Boris must stand strong against the EU this week. No deal is always better than a bad deal," Tice said. “If he caves, he is finished. If he holds firm, he can survive; it is as simple as that."

"He must not take the British people for fools,” Tice warned.

Independent Business Network chairman John Longworth said a ‘no deal’ Brexit would be "far more damaging to the EU than it is to us”. The UK's exports to the 27 EU member states totalled £294 billion (€328 billion) in 2019 - £80 billion (€89 billion) less that those nations exports to Britain. Less than half of British exports - 43 per cent - went to the EU last year.