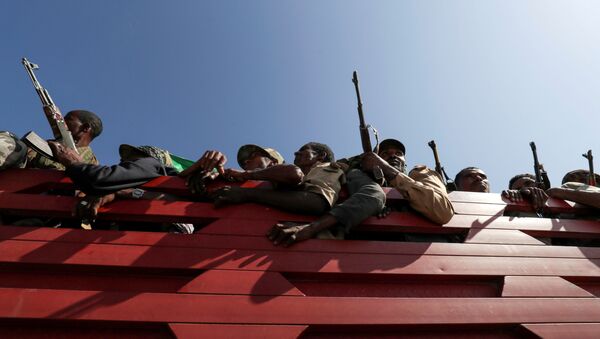 The rockets hit the Asmara airport at around 8 p.m. local time (17:00 GMT) on Saturday, the newspaper said. The number of casualties is unknown.

One eyewitness in Asmara told The Telegraph that the rockets appeared to be long-range missiles.

Meanwhile, Morad News reported that three missiles hit Asmara on Saturday evening: two of them striking the airport and the third hitting the Sembel residential complex. According to Morad News, communications were disrupted in parts of Eritrea and power was cut in the capital following the missile attacks.

UPDATE: Communications down in parts of #Eritrea following missile attacks in the capital at around 8:00 pm this evening. 2 of the missiles hit #Asmara airport. 3rd missile hit the Sembel residential complex. Casualties unknown yet. Power cut in the city, army patrolling streets.

​Earlier on Saturday, Chairman of the Tigray People's Liberation Front (TPLF) and acting President of the Tigray Region Debretsion Gebremichael claimed responsibility for two missile attacks in the Amhara region of Ethiopia and did not exclude more strikes, including in Eritrea, saying on Tigray TV that all means would be used "to defend ourselves."

​Earlier this week, the Ethiopian Parliament approved the establishment of a provisional government in Tigray. Prime Minister Abiy Ahmed Ali said on Twitter that law enforcement operations in Tigray were proceeding as planned and that they would cease only when the "criminal junta" is disarmed.

​At the start of November, the Ethiopian government accused the TPLF of attacking a federal military base and launched an offensive in the Tigray Region.