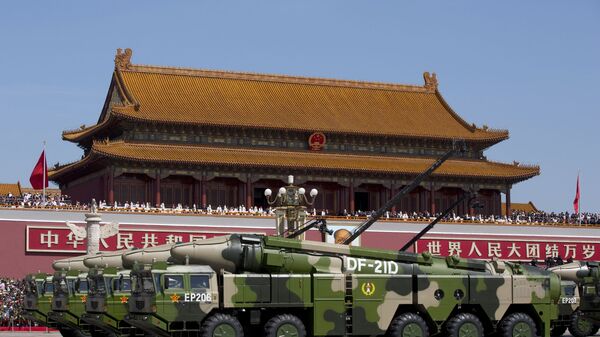 Asya Geydarova
Editor
All materialsWrite to the author
According to a former PLA colonel, the successful launch of the DF-26B and DF-21D missiles in August is a "warning" to the United States that they should not take any military risk against China.

Two of China's "aircraft-carrier killer" missiles that were launched in August hit a moving ship near the Paracel Islands in the South China Sea, the South China Morning Post reported on Saturday.

When the media first reported about the launches on 26 August, they said that the missiles fell into the South China Sea and no specific target was mentioned. The move came as a response to an American U-2 plane, which China said violated a no-fly zone as Beijing was conducting a live-fire naval drill in the Bohai Sea.

"So several days later [after the aircraft carrier manoeuvres], we launched the DF-21 and DF-26, and the missiles hit a vessel sailing south of the Paracel Islands", said Wang Xiangsui, a former senior colonel.

Wang said that the US considers that to be "a show of force", while China is doing it "because of their provocation".

"This is a warning to the US, asking it not to take any military risks", he said. "Such actions mark the bottom line of Sino-US confrontation."

Following the move, Washington said its U-2 did not violate international rules and that its military moves in the region would continue.

In recent times, the United States has increased its military presence, including jets and vessels, close to the borders of China, which Beijing perceives as a potential threat. Likewise, Washington challenges Beijing's claims to the South China Sea by conducting military operations there and calling for freedom of navigation in the disputed waters. In July, US Navy said the USS Nimitz and USS Ronald Reagan conducted joint drills in the South China Sea, "in support of a free and open Indo-Pacific".