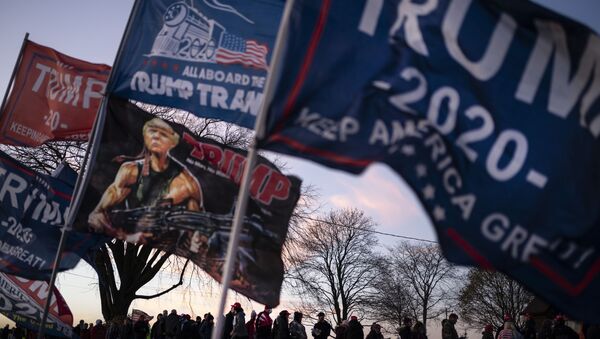 Speaking to Fox News’ Lou Dobbs on Friday, Powell said she agreed that the November vote was the culmination of four years of efforts by Trump’s opponents to remove him from office.

“It’s been organised and conducted with the help of Silicon Valley people, the big tech companies, the social media companies and even the media companies, and I’m going to release the Kraken,” she promised, referring to her ongoing investigation.

Bringing up the Dominion scandal, in which Trump lawyers demonstrated that faulty voting machines have flipped some 6,000 votes in Biden’s favour in one county in Michigan due to a 'glitch', Powell alleged that this was just the tip of the iceberg in an international conspiracy.

“I can hardly wait to put forward all the evidence we have collected on Dominion, starting with the fact that it was created to produce altered voting results in Venezuela for Hugo Chavez, and then shipped internationally to manipulate votes for purchase in other countries including this one,” Powell said.

According to Powell, Dominion has received money “from Venezuela and Cuba and China has a role in it also. So if you want to talk about foreign election interference, we certainly have it now.”

The attorney’s claims about Dominion’s use in Cuba and Venezuela have yet to be independently verified. However, Dominion and other voting machine vendors were scrutinised by US lawmakers in January of this year, with House lawmakers expressing concerns about the use of foreign components in America’s voting equipment in hearings involving the big three voting machine makers. Officials from all three admitted that their equipment uses components made in China, but said that the practice of using foreign suppliers wasn’t unique to the voting machine industry.

Trump Lawyer Wants Recount in 28 States With 'Glitch' That Flipped 6,000 Votes to Biden
“Several of those components, to our knowledge, there is no option for manufacturing those in the United States,” Dominion Voting Systems CEO John Poulos said at the time, as quoted by the Associated Press.

In late 2019, the Brennan Center for Justice at New York University Law School also expressed concerns about the lack of federal oversight for the private companies making voting machines and creating and maintaining voter registration databases, and called for an overhaul of the system.

In her interview with Dobbs, Powell said her team has accumulated “staggering statistical evidence” as well as “staggering testimony from witnesses, including one who was personally in briefings” from when the alleged election fraud plans were “discussed and planned”.

The attorney noted that she has already begun collecting evidence on the “financial interests” of state governors and secretaries of state who purchased the Dominion machines.

Asked whether there was enough time to prove her voter fraud case ahead of the December deadlines for certifying the election, Powell insisted that the election results would be set aside in states where fraud has been alleged, “even if the states are stupid enough to go ahead and certify the votes”.

US Election Triggers Fears of 'Slow Motion Coup D'Etat' & 'Daylight Robbery of Votes', Observers Say
“We are talking about hundreds of thousands of votes. President Trump won this election in a landslide, it’s going to be irrefutable,” she insisted, adding that “there needs to be a massive criminal investigation and it’s going to affect millions of voters and elections”.

Powell also attacked the FBI and other members of the intelligence community, saying that “even Democratic senators and congress people for years have reported problems with this [voting] system to the FBI and to the government and nobody’s done a blooming thing about it”. The Department of Homeland Security’s election security section should be fired, as should FBI chief Christopher Wray, in her view.

“We are on the precipice – this is essentially a new American Revolution, and anybody who wants this country to remain free needs to step up right now. These are federal felonies. Altering a vote or changing a ballot is a federal felony. People need to come forward now and get on the right side of this issue and report the fraud they know existed in Dominion voting systems because that was what it was created to do,” Powell said.

Joe Biden and other Democratic officials have rejected claims by Trump and some of his allies of large-scale voting fraud in key battleground states. The Trump campaign has filed lawsuits in Arizona, Pennsylvania, Georgia and Michigan to challenge election results. Trump himself has issued dozens of tweets alleging election fraud, saying he found it suspicious that his early lead election night and the day after later evaporated in key states as the counting of mail-in ballots ramped up.

000000
Popular comments
These allegations are garbage and toilet. Trump has lost and his friends and supporters must be bold to accept his defeat. The world is happy to see Trump lose the election. He was just a monster waiting to be got rid . The world is better off without his presidency.
kohems
14 November 2020, 15:21 GMT
000000
I hope Sidney Powell has security 24/7.