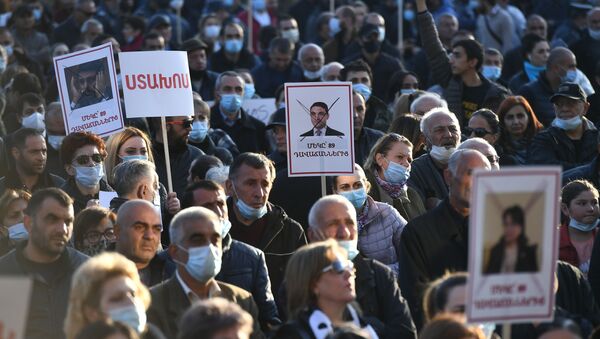 On Friday, a massive protest took place in the centre of Armenia's capital Yerevan, with protesters demanding the resignation of Prime Minister Nikol Pashinyan.

Sputnik is live from Yerevan as demonstrations against the Nagorno-Karabakh ceasefire agreement continue in the Armenian capital, where protesters are calling for the prime minister, Nikol Pashinyan, to step down.

Mass rallies, staged by the opposition, erupted earlier this week after Yerevan and Baku agreed to a ceasefire in Nagorno-Karabakh, putting an end to six weeks of hostilities in the region. The agreement resulted in the loss of most territory controlled by the Armenian-majority self-proclaimed Republic of Artsakh (Nagorno-Karabakh) and specifies the deployment of Russian peacekeepers to the region.

The Armenian Prime Minister described the agreement as a very hard decision to make, which nonetheless did not appease his domestic critics.

About 10 leaders of the Armenian opposition have since been detained for staging protests amid martial law, which was introduced in the country in late September, but some have since been released after a court ruling.