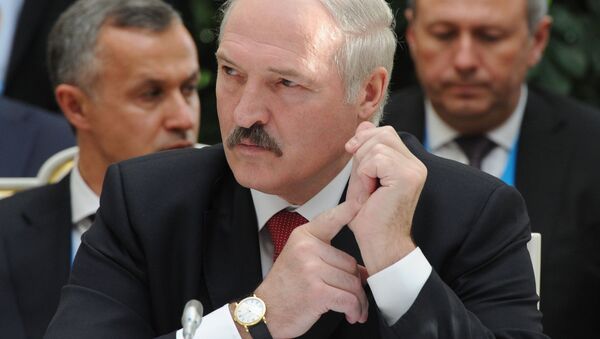 © Sputnik / Michael Klimentyev
/
Go to the photo bank
Subscribe
Ilya Tsukanov
All materialsWrite to the author
Alexander Lukashenko has been president of Belarus since 1994, recently winning reelection for a sixth term in office. Belarus’s liberal opposition has contested the results, and staged mass street protests in a bid to ensure the ‘peaceful handover of power’.

Alexander Lukashenko has opened up about the attempt on his life that was made during his very first campaign for president, saying that he never bothered to go around whining about it, but that the files are still present in the country’s intelligence services’ archives.

“Would you like to know that I was shot at during the first elections?” Lukashenko said, speaking with a group of journalists from Belarus, Russia, Ukraine, Kazakhstan and Moldova on Friday.

“I didn’t cry about it. I didn’t go around telling everyone about it. When I became president, documents were brought to me recommending that an investigation be started. I said to them – put them in the KGB archive. I didn’t even start to investigate these events. Now these documents are collecting dust somewhere in the KGB,” Lukashenko continued, referring to Belarus’s national intelligence service, which still goes by its Soviet-era name.

“Later I discovered that some ‘well-wishers’ had approached my opponent, [Vyacheslav] Kebich, the two of us had made it to the second round, and proposed an idea: ‘we shoot up your car and Lukashenko’s; you remain alive, and Lukashenko dies’,” the Belarusian president added.

According to Lukashenko, the attack would have been blamed on Belarus’s nascent nationalist elements, including Zenon Poznyak and Stanislav Shushkevich, because both he and Kebich were considered independent, moderate alternatives.

The assassination attempt, which took place on the night of June 17, 1994, was mentioned in Belarusian media coverage at the time, and in New York Times coverage of the Belarusian election. 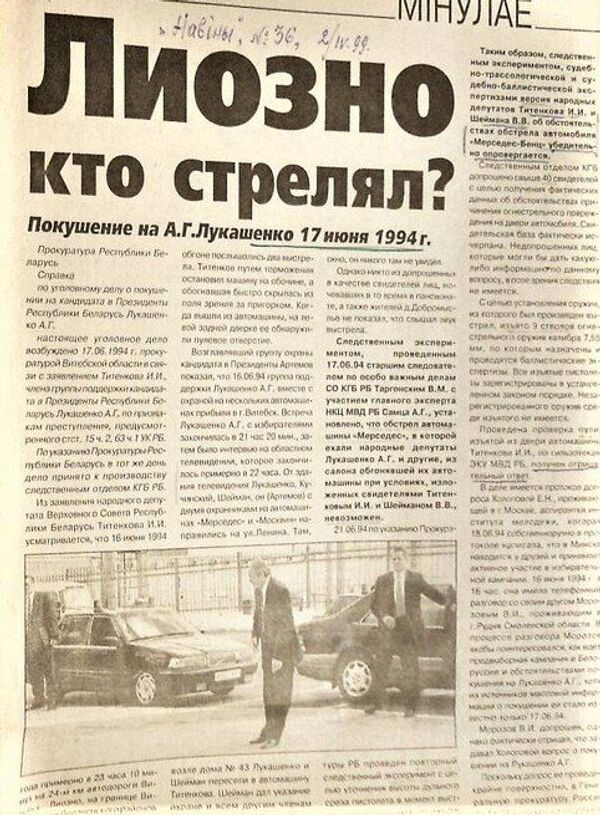 Lukashenko to Opposition: Don’t Run Off to the West

In the interview, Lukashenko also took aim at Belarus’s current crop of opposition politicians, saying that instead of “running off” to Poland or Lithuania, they should stay in Belarus and work for the benefit of their country. “You can’t build the happiness of the Belarusian people on NATO’s bayonets,” he said.

Lukashenko, 66, has been president of Belarus for 26 years, serving out five consecutive terms in office and recently winning a sixth. Svetlana Tikhanovskaya, leader of Belarus’s united opposition, has accused him of stealing the election from her, alleging that the 80 percent of the vote officials said went to Lukashenko actually went to her. Lukashenko has dismissed the allegations, saying it was impossible to falsify such a huge percentage of the vote and to remain in power, and criticised Tikhanovskaya and other members of her entourage for fleeing the country while seeking to destabilise the situation at home via strikes and protests.

Belarusian Opposition Figure Awarded Freedom Prize by the EU Will 'Sell Belarus Out', Analyst Says
In his 26 years in office, Lukashenko’s government has sought to initiate an economic, military and geopolitical integration with Russia, and worked to reverse the collapse of the country’s major industrial enterprises, state farms, educational and medical institutions, transitioning from shock therapy to the creation of what has been dubbed a “social market economy”.

Lukashenko has won every election since 1994 with margins between 77.4 percent and 84.4 percent. His political opponents at home and Western officials have repeatedly accused him of electoral fraud and an authoritarian governing style, with US officials labelling him “the last dictator in Europe” in the 2000s. He has brushed off these allegations, and even used the term ironically to refer to himself.

000000
Popular comments
Of course he's a dictator for he won't be a toady for the West,a as for deranged woman who claims she won instead they should lock her up for treatment.~~~

bluedogg
14 November 2020, 15:59 GMT2
000000
Arguably, Europe's most popular national leader although Hungary's Victor Orban must be a contender for the title too.