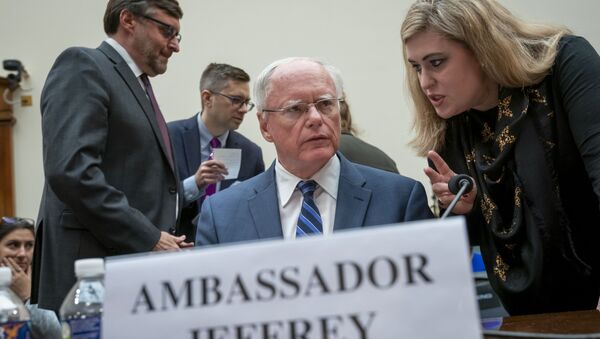 © AP Photo / J. Scott Applewhite
Subscribe
International
India
Africa
Ilya Tsukanov
All materialsWrite to the author
In late 2018, Donald Trump ordered the immediate withdrawal of almost all US troops from Syria within 90 days. He repeated the order in October 2019. Several hundred US troops remain in Syria to this day, notwithstanding the president’s executive decisions.

Jim Jeffrey, outgoing US special representative for Syria and special presidential envoy for the Western coalition against Daesh (ISIS),* has frankly admitted that he and members of his staff deliberately obfuscated and covered up the true size of the US military footprint in Syria from the president.

“We were always playing shell games to not make clear to our leadership how many troops we had there,” Jeffrey said, speaking to Defense One.

“What Syria withdrawal? There was never a Syria withdrawal,” the veteran diplomat cheekily added, referring to Trump’s repeated orders in late 2018 and then again in 2019 to bring US troops home.

“When the situation in northeast Syria had been fairly stable after we defeated ISIS, [Trump] was inclined to pull out. In each case, we then decided to come up with five better arguments for why we needed to stay. And we succeeded both times. That’s the story,” Jeffrey boasted.

He added that the real number of US troops in Syria today is “a lot more” than the estimated 200-400 Trump agreed to leave behind in 2019 to “secure” the country’s oil fields and prevent them from falling into the hands of the Syrian government or the terrorists. 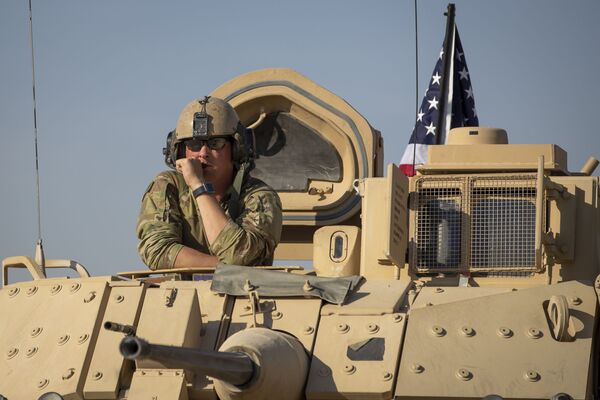 A U.S. soldier observes form the top of a fighting vehicle at a US military base at undisclosed location in Northeastern Syria, Monday, Nov. 11, 2019.
© AP Photo / Darko Bandic

Jeffrey, 74, served as US ambassador to Iraq under Barack Obama, and as deputy national security advisor to George W. Bush. In August 2016, he joined nearly 50 other Republican national security officials in signing a letter suggesting Trump was not qualified to be president and would put American security at risk if he won.  Trump appointed him to his administration anyway in 2018. Secretary of State Mike Pompeo announced on Monday that Jeffrey would be retiring later this month.

Jeffrey praised Trump for achieving what he described as a “stalemate” in multiple Middle Eastern conflicts, but said he stood by his decision to add his signature to the 2016 letter attacking Trump. He also encouraged Joe Biden, Trump’s possible successor, to ‘stay the course’ laid out by him and other members of the Trump administration. He warned Biden not to try to engage in Bush-style nation-building in Syria. “I think the stalemate we’ve put together is a step forward and I would advocate it,” he stressed.

Syria Seizes Stock of Terrorist Weapons, Including US-Made TOW and LAW Missiles - Photos
Biden is known to have been an active proponent within the Obama administration of the CIA’s ‘Operation Timber Sycamore’ to provide arms, supplies and training to the thousands of jihadist militants who signed up to fight the Syrian government starting in 2012. The covert operation was closed down by the Trump administration in 2017.

Commenting on the Defence One Story, CNN anchor Jim Sciutto noted that senior Pentagon officials told him similar stories about how they “fooled” Trump into leaving troops in Syria indefinitely.

“If you look at his tweets, they were definitive about leaving. And then we didn’t leave. And now we haven’t left, we’re still there, and that’s a good thing,” Sciutto quoted one unnamed official as saying.

In #TheMadmanTheory, senior DOD officials told me how they fooled Trump into leaving troops on the ground:

“If you look at his tweets, they were definitive about leaving. And then we didn’t leave. And now we haven’t left, we’re still there, and that’s a good thing.” https://t.co/vo3HBxb7tg

Syria has reported a major uptick of US military activity in its northeastern provinces in recent months, with the region home to the vast majority of the war-torn country’s oil-rich areas needed for reconstruction.

Damascus has repeatedly demanded that all foreign forces not explicitly invited into the country by Syria’s internationally recognized government to withdraw completely and immediately.

Trump on Syria: “U.S. Troops Will Remain…Where They Have the Oil”
Late last year, Jeffrey insisted that he had “every belief” that the US’s plundering of Syria’s oil resources was “legal under international law.”

Donald Trump began a bit of housekeeping in the US security apparatus on Monday, firing Secretary of Defence Mark Esper and replacing him with Christopher Miller, director of the National Counterterrorism Centre. Esper’s termination set off a string of resignations at the Pentagon. Republicans then rallied to the defence of CIA director Gina Haspel amid rumours that she too may get the sack. FBI director Christopher Wray is also reportedly on the chopping block, with former CIA director John Brennan speculating that the president might pursue “vendettas” against his intelligence officials, possibly for their failure to support him amid the corruption probe against the Biden family’s potentially illegal business dealings in Ukraine.