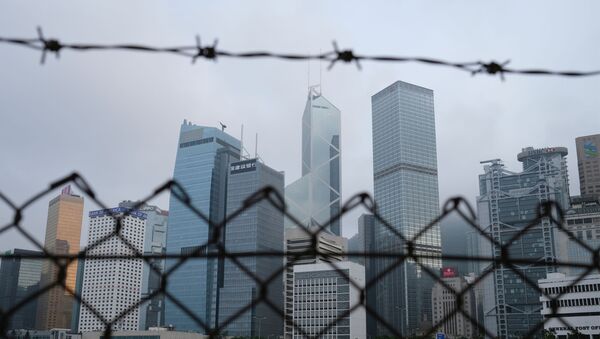 © REUTERS / Jacquelyn Martin
Subscribe
Evan Craighead
All materialsWrite to the author
The US Department of State and US Department of the Treasury have announced that four officials in the Chinese government have been sanctioned for their respective roles in the implementation of the Hong Kong national security law.

“The Department of State is designating Li Jiangzhou, Edwina Lau, and Steve Li Kwai-Wah as having been leaders or officials of entities, including any government entity, that have engaged in, or whose members have engaged in, developing, adopting, or implementing the Law of the People’s Republic of China on Safeguarding National Security in the Hong Kong Special Administrative Region (NSL),” asserted US Secretary of State Mike Pompeo in a Monday news release.

Today we are taking action against four Chinese and Hong Kong-based officials in connection with policies and actions that have undermined Hong Kong’s autonomy, eroded the rule of law, and stifled dissent through politically motivated arrests. #StandWithHongKong

The US secretary of state also sanctioned Deng Zhonghua, the deputy director of the Hong Kong and Macau Affairs Office, who has reportedly “taken several actions to interfere in Hong Kong affairs and crack down on protestors.”

From 1842 until 1997, Hong Kong was part of the British Empire, having been seized from China as a war prize at the end of the First Opium War. It was returned to Beijing by treaty in 1997, becoming a semi-autonomous part of China with a slow process of incorporation into the country’s market socialist system. When Beijing passed a new security law in June 2020 after a year of violent protest and included Hong Kong in the law, Washington cried foul and claimed the city’s autonomy had been undermined.

Hong Kong’s acting Chief Executive Matthew Cheung spoke out against Washington’s decision to impose sanctions against the officials from the Chinese mainland and Hong Kong.

“About US sanctions against four officials - two from the Mainland government and two from Hong Kong - we've stated our position clearly when the first batch of officials was sanctioned that it is absolutely unacceptable,” he said Tuesday, as reported by the Hong Kong government’s news outlet.

Cheung contended the Hong Kong government had a right to protect its national security.

“So we are not going to be intimidated by any of these actions. In fact, this is clearly breaching international practice, apart from international law.”

November 5 marked the launch of the NSSA Reporting Hotline, an anonymous snitch line run by the National Security Service of the Hong Kong Police Force.

The hotline allows Hongkongers to report fellow citizens believed to be in violation of the Beijing-implemented national security law. Said legislation calls for acts of “secession,” “subversion,” “terrorism” and “collusion with foreign forces” to be met with possible life imprisonment.