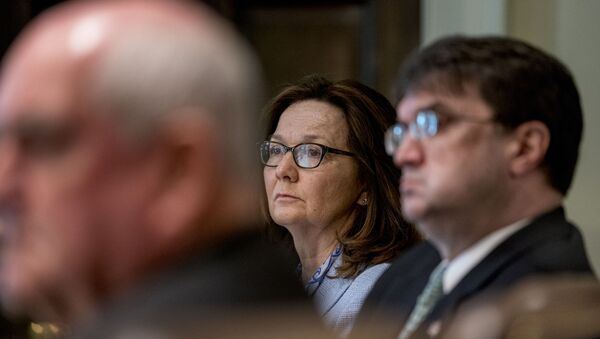 Aleksandra Serebriakova
Moscow-based Sputnik correspondent specializing in foreign affairs.
All materialsWrite to the author
Following the announcement of preliminary election results, President Donald Trump replaced Pentagon boss Mark Esper with Christopher C. Miller, Director of the National Counterterrorism Centre. The move came after speculations that Esper could not be the only possible victim of the post-election shakeup.

CIA Director Gina Haspel has “done a great job” and there are no reasons to fire her apart from the president’s wish to have “someone else” at her post, Republican Senator for Florida Marco Rubio told The Hill when asked to comment on the speculations about the woman’s potential dismissal.

Rubio, who is the acting Chairman for the Senate Intelligence Committee, said it would be good to keep Haspel for the “stability of the agency” but the final call would be still up for the president to make.

A Wave of Potential Dismissals

Last month, Axios reported, citing sources familiar with the situation, that Trump was considering firing Haspel, Secretary of Defence Esper and FBI Director Christopher Wray. Following election results, POTUS announced that Esper had been terminated at his post, with his job now being landed to Director of the National Counterterrorism Centre Christopher C. Miller.

On Tuesday, Haspel met with members of the Senate Intelligence Committee and Republican Senate Majority Leader Mitch McConnell, something that has been interpreted by observers as the high-profile GOP official’s undeclared support for the CIA chief, who he previously praised her for having “poise, talent and experience.”

McConnel’s adviser, Republican Senator from Texas John Cornyn, also said that both Haspel and FBI boss Wray should remain at their seats.

"I believe both of them are good public servants and have done a good job for the country,” Cornyn reiterated.

Haspel was confirmed as CIA director in May 2018, to become the first woman to serve at the post in a permanent position. President Trump initially praised the Kentucky-born official but has eventually changed his assessment of CIA boss following her opposition to the release of declassified documents related to review of Obama administration’s handling of the Trump-Russia probe outlined in the Justice Department’s Durham report.  Trump, it is said, was frustrated with Haspel’s reluctance to greenlight the publication of 1000-pages of docs eventually released by Director of National Intelligence John Ratcliffe.

Haspel so far has refused questions from reporters over the possibility of her eventual ouster.

000000
Popular comments
Says a lot for the Republicans when they clamour to embrace the charms of this former heinous supporter and administrator of torture Gina Haspel in Iraq and elsewhere around the globe.
amike
11 November 2020, 19:27 GMT4
000000
Such eXotic animals belong in a high security zoo or circus act.