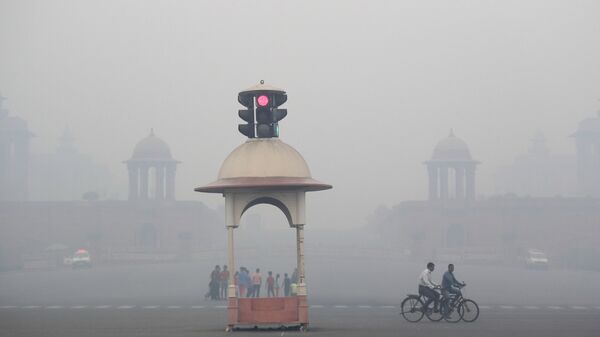 Around 30 million people in India’s national capital Delhi woke up to a grey morning as a thick blanket of smog enveloped the city on Wednesday, nearing "emergency" levels.

Pollution levels shot up to “Hazardous” according to the Air Quality Index (AQI), a level when residents may start experiencing more serious health issues, hovering over the 517 mark in parts of Delhi and adjoining regions.

It is the sixth consecutive day Delhi has recorded severe category air pollution. On Tuesday, the city hit the "Emergency" mark, with some areas reporting an AQI as high as 735 – the highest so far.

The visibility in the air also reduced significantly due to dense smog and low air pressure.

Several exasperated residents took to Twitter to show the scary yearly scenario in Delhi. The smog has left many Delhi residents with irritated eyes, itchy throats and frequent headaches.

Delhi: Visibility reduces due to smog in the national capital, as the air quality deteriorates in Delhi-NCR. Visuals from
Karkardooma.
Air Quality Index (AQI) at 404 ('severe' category) in Anand Vihar, as per Central Pollution Control Board (CPCB). pic.twitter.com/zpMNGOfQea

Delhi pollution💨 is going from bad to worse😣 AQI is touching 500😟, my eyes are itching😑 from the smog & visibility is so low👤....#DelhiPollution #DelhiAirQuality #delhismog #Delhi pic.twitter.com/TAS056YMt6

The Delhi state government has been taking several measures to battle the pollution crisis in the city, including launching a ‘Green War Room’, the mobile application “Green Delhi”, an anti-dust drive, and the installation of anti-smog guns.

The air pollution poses a graver threat to residents of Delhi's smog-affected areas amid the ongoing coronavirus pandemic, with health experts suggesting that the combination of Covid-19 and air pollution could lead to more severe symptoms.

The people in Delhi are unable to breathe clean air for most of the year as the environmental condition in India is typically poor. According to a Greenpeace and AirVisual analysis of air pollution, issued in March 2019, 22 out of the 30 worst cities in the world in terms of air pollution are located in India.