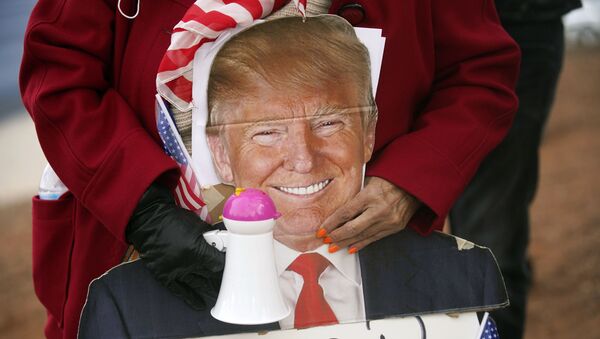 Aleksandra Serebriakova
Moscow-based Sputnik correspondent specializing in foreign affairs.
All materialsWrite to the author
It earlier emerged that an anonymous British gambler has wagered $5 million on Donald Trump’s re-election shortly before the November vote. However, the US media has now pronounced Joe Biden a preliminary winner of the race based on the ballots counted so far.

In the United Kingdom, where political betting is officially legal, millions of pounds are being bet on US President Donald Trump eventually throwing out election results with his legal challenges in key swing states, the Sun revealed.

As such, US-based firm Betfair has witnessed £100-million wagers being gambled on the US election since 3 November. Despite calls from major US news outlets that Joe Biden is clearly on the way to get all necessary election votes to be declared the next US president, gamblers can still make a bet at Betfair at around 10/1 suggesting the results of the November vote can be shockingly reversed.

It is said that bets on Donald Trump’s re-election had plunged from election night to nearly zero to then dramatically grow in the last two days. The platform now trades around £587,036,554 on the outcome of the presidential vote, an unprecedented sum considering the fact that more than a week has passed since election day.

Betfair, however, seems to be refusing bets that it is Joe Biden who will eventually emerge as a final winner of the race.

US-based betting site Predictit also continues to accept wagers on Donald Trump’s possible reversal of election results, at an even higher price of 7/1, numbers that are understandably down from 50/1 bet  last Tuesday night.

One British ex-banker even previously gambled $5 million on Trump’s re-election through a private bookie, which experts from the industry believe was the “biggest ever” bet made on politics.

The Donald Trump campaign has now filed lawsuits in election-vote-rich states of Pennsylvania, Georgia, Michigan and Nevada to challenge vote results, citing a lack of transparency and the tallying of “illegal” ballots after the deadline. The president believes that he has a chance to overturn the outcome of the vote, arguing that the election were fraudulently “stolen” from him.