‘It Was Dope’: Cardi B Apologises After Being Slammed for Hindu Goddess Look Holding Shoe 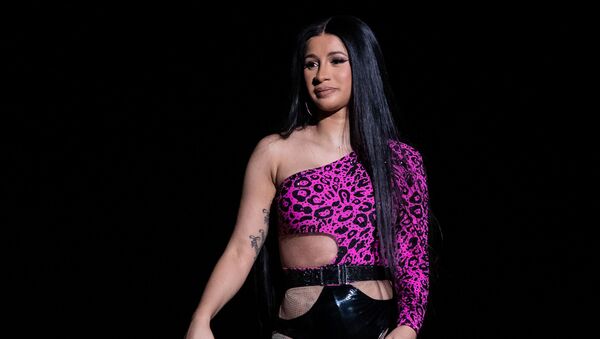 Rapper Cardi B made her first major foray into the shoe industry with a buzz, attempting to woo Indians by paying homage to the Hindu Goddess Durga - a warrior with eight hands. However, the attempt fell flat as enraged Indians criticised her for insulting the religion.

Cardi B was forced to issue an apology in an Instagram post hours after she shared magazine cover with her glamorous picture posing as Hindu Goddess Durga.

The cover features Cardi B with 10 hands, just like Goddess Durga. But instead, she was seen clutching a shoe instead of weapons.

If Cardi’s rockin’ it, go buy stock in it. That’s a tip as FN’s November cover star @iamcardib makes her first major foray into the shoe industry with the Nov. 13 debut of her Club C Cardi sneaker collection with @Reebok.⁠ ⁠ In a @GeorgesHobeika dress, she pays homage to Durga, the Hindu goddess, whose symbols of protection and inner strength resonate as much in modern times as they have through the centuries. Like Durga, Cardi B is a dominant female voice at a critical time.⁠ ⁠ At the link in bio, Cardi B gets candid with FN’s @nikarajohns about her future in the fashion industry, upcoming Reebok collab and her relentless need to win in the FN exclusive.⁠ ⁠ --⁠ Photography: @jorafrantzis; Style Director: @shannonadducci ; Styling: @kollincarter; Style assistant: @jennijenu; Tailor: @sirbabajagne; Makeup: @erika_lapearl_mua; Hair: @tokyostylez; Nails: @marienailz; Set Design: Brielle Hubert, Pete Hickok and Yalina Flores⁠

“When I did the shoot, the creatives told me I was going to represent a Goddess; that she represents strength, femininity and liberation, and that’s something I love and I’m all about. And though it was dope, if people think I’m offending their culture or their religion I want to say that was not my intent. I do not like offending anyone’s religion; I wouldn’t like it if someone did it to my religion,” said Cardi B in the video story on Instagram.

Cardi B shared the picture wearing off-shoulder red Georges Hobeika dress and said it is a homage to Durga while comparing herself with the goddess. “Like Durga, Cardi B is a dominant female voice at a critical time,” read the caption.

The “WAP” star was trolled by social media users for wearing revealing clothes while posing as Goddess Durga and for holding a shoe.

Hinduism is one of the most ancient and sacred religions in the entire world. Durga is a goddess that we worship with the utmost respect. She is a symbol of power, hope, and for the fight against all that is evil in this world.

​Not just Indians, but many social media users from other countries also criticised her for the shoot.

CardiB dressing up as a Hindu goddess holding a shoe and calling it homage is extremism of double dealing which not only misconstrues the image of Hinduism worldwide but also hurts the sentiments of Hindus. And it is quite clear why she did it.

So some people are saying Cardi B is paying homeage to our hindu goddess Durga.

As a hindu, I want to say that, durga maa is never depicted bare bodied.
Secondly it is prohibited to wear shoes in a temple and this woman is holding a shoe on her hand depicting goddess Durga? pic.twitter.com/Dr45M4azmO

Shoe a fucking shoe do you know who durga maa is? This is disrespectful!!! Cardi it's a No. Never. Not. From us pic.twitter.com/VTbVluDsW0