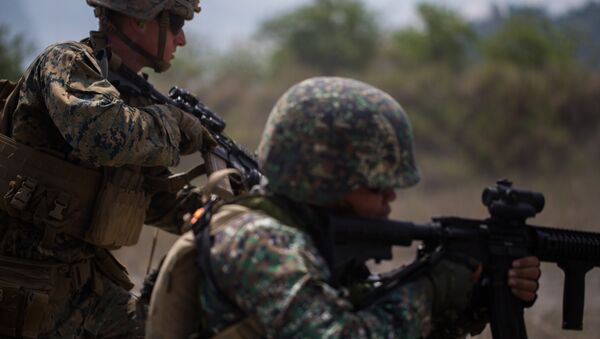 Morgan Artyukhina
All materialsWrite to the author
After Taiwanese defense leaders publicly revealed US troops were training Taiwanese soldiers on the island, the Pentagon claimed the reports were “inaccurate.” However, the US has a long history of concealing its deploying of troops to the territory, which it formally recognizes as belonging to China.

On Monday, Taiwan News reported that the Taiwanese Naval Command had confirmed that a contingent of US Marines had arrived on the autonomous island at the invitation of Taipei to train Taiwanese troops.

The reports claimed the special operations “Marine Raiders” would be there for four weeks, and the Taiwanese Naval Command told the outlet it was “routine Taiwan-US military exchange and cooperation training,” despite this being the first public admission of US training of Taiwanese troops since Washington stopped recognizing the Taiwanese government in 1979.

In response, Pentagon spokesperson John Supple told US military publication Stars and Stripes on Wednesday that the reports were “inaccurate.”

“The United States remains committed to our One-China Policy,” Supple told the outlet. Washington agreed to the principle when it normalized relations with the People’s Republic of China in 1979, which sees Taiwan as a province in rebellion. The Taiwanese government were the losers of the 1949 civil war that saw communist control established across all of mainland China.

However, Taiwan News pointed out the US “sends small units of elite troops of other branches of the armed forces for joint training missions to Taiwan on an annual basis, but they are rarely acknowledged by the Taiwan government,” noting US Army Special Forces hold annual exercises called Balance Tamper on the island in conjunction with Taiwan’s Army Aviation and Special Forces Command, among other training exercises.

The Drive pointed out in June that ultra-rare footage of the Balance Tamper drills had been released by a special forces unit. Even though the drills were not acknowledged as Balance Tamper, they include shots of equipment such as helicopters and rifles that are only used by the Taiwanese military.

​Washington also concealed the presence of US troops at the American Institute in Taiwan (AIT) for 14 years. The institution serves as the de facto US embassy in Taipei, and in April 2019, as it prepared to move to a new facility, AIT spokesperson Amanda Mansour revealed, "Since 2005, US government personnel detailed to AIT have included active duty military, including service members from the Army, Navy, Air Force and Marines.” Marines typically perform security roles at formal US embassies around the globe.

Under US President Donald Trump, the US has vastly expanded its military support for Taiwan, signing deals to deliver billions of dollars in weapons, including F-16V “Viper” fighters, torpedoes and other equipment. Several more deals remain in various stages of approval in Washington and would supply Taiwanese forces with cruise missiles, rocket artillery, MQ-9B Reaper drones and more.

Last week, after the latest prospective deal was announced, Chinese Foreign Affairs Ministry spokesperson Wang Wenbin denounced it, saying it “brutally interferes in China’s internal affairs and seriously undermines China’s sovereignty and security interests.” He vowed a “proper and necessary response” to the deal if it goes through.

Earlier this year, the foreign ministry announced sanctions against US defense contractors Lockheed Martin, Raytheon and Boeing, for their part in supplying Taiwan with weapons.