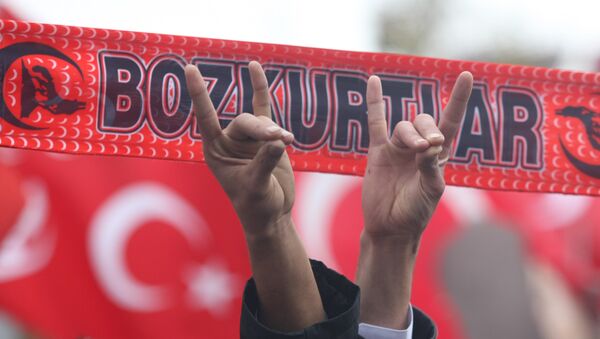 © AFP 2021 / ADEM ALTAN
Subscribe
Igor Kuznetsov
All materials
Earlier in November, the Grey Wolves were banned in France, as Interior Minister Gerald Darmanin said the organisation was responsible for inciting hatred and committing acts of violence. The organisation maintains a pan-Turkic stance, but has been banned in several Turkic countries, including Azerbaijan.

Members of the Grey Wolves, a Turkish Islamist group, have demonstrated in the Swedish city of Malmö. Last week, the group was banned in France amid the nation's crackdown against Islamist extremism, the newspaper Expressen reported.

The demonstration was organised in support of Azerbaijan, following the violent conflict with Armenia over Nagorno-Karabakh. According to the police, an association called United Azerbaijan had sought, and received, permission to demonstrate.

On Facebook, however, the Grey Wolves posted an invitation to the demonstration, urging their followers to come and support their “blood brothers in Azerbaijan”.

During the demonstration, protesters made the Grey Wolves sign and brandished the organisation's symbols.

According to the Swedish-Kurdish author and journalist Kurdo Baksi, it is unusual for the Grey Wolves to show up and demonstrate.

“I have checked and I don't know whether it has ever happened before. It's unusual. This is an organisation that in the 80's hid in laundry rooms because they did not want publicity,” Baksi told Expressen.

Baksi also ventured that members of the organisation seek to “test their limits”, acting on a “direct order” from Turkish President Recep Tayyip Erdogan. “They are now using the conflict in Azerbaijan and the beheading of the teacher in France to justify Erdogan's criticism of Europe,” Baksi added.

Javidan Humbatov, the contact person for United Azerbaijan that organised the demonstration, underscored that they have no connection with the Turkish nationalist organisation and stressed that it is impossible to control all the participants.

The demonstration in Malmö went smoothly, and the police have no reports of any disturbances.

Self-styled as a cultural foundation, the Grey Wolves are often seen as the military branch of the Turkish Nationalist Movement party (MHP). It maintains a pan-Turkic stance, and its logo contains a wolf and the Islamic crescent. The group's members are known to have participated in violent attacks on Kurds, Armenians and Greeks.

Earlier in November, the Grey Wolves were banned in France, as Interior Minister Gerald Darmanin said the organisation was responsible for inciting hatred and committing violent acts.

Previously, the organisation was banned in Azerbaijan and Kazakhstan, among others, as the organisation expanded its sphere of influence to former Soviet states with Turkic and Muslim populations in the early 1990s. The Grey Wolves have been classified as an extremist organisation in Russia.

The Swedish Green Party was hit by a political scandal involving the Grey Wolves in 2016, when images emerged of party heavyweight and then-Housing Minister Mehmet Kaplan attending a dinner party alongside leading members of the organisation.

000000
Popular comments
This is a terrorist group that should be banned. France must pass a complete EU ban of the Grey Wolves terrorist.

vargus
11 November 2020, 14:51 GMT3
000000
Newsfeed
0
New firstOld first
loader
LIVE
Заголовок открываемого материала
Access to the chat has been blocked for violating the rules . You will be able to participate again through:∞. If you do not agree with the blocking, please use the feedback form
The discussion is closed. You can participate in the discussion within 24 hours after the publication of the article.
To participate in the discussion
log in or register
loader
Chats
Заголовок открываемого материала
Worldwide
InternationalEnglishEnglishMundoEspañolSpanish
Europe
DeutschlandDeutschGermanFranceFrançaisFrenchΕλλάδαΕλληνικάGreekItaliaItalianoItalianČeská republikaČeštinaCzechPolskaPolskiPolishСрбиjаСрпскиSerbianLatvijaLatviešuLatvianLietuvaLietuviųLithuanianMoldovaMoldoveneascăMoldavianБеларусьБеларускiBelarusian
Transcaucasia
ԱրմենիաՀայերենArmenianАҧсныАҧсышәалаAbkhazХуссар ИрыстонИронауОssetianსაქართველოქართულიGeorgianAzərbaycanАzərbaycancaAzerbaijani
Middle East
Sputnik عربيArabicArabicTürkiyeTürkçeTurkishSputnik ایرانPersianPersianSputnik افغانستانDariDari
Central Asia
ҚазақстанҚазақ тіліKazakhКыргызстанКыргызчаKyrgyzOʻzbekistonЎзбекчаUzbekТоҷикистонТоҷикӣTajik
East & Southeast Asia
Việt NamTiếng ViệtVietnamese日本日本語Japanese俄罗斯卫星通讯社中文（简体）Chinese (simplified)俄罗斯卫星通讯社中文（繁体）Chinese (traditional)
South America
BrasilPortuguêsPortuguese
NewsfeedBreaking
13:45 GMT'Three Civilians Killed in US Airdrop Operation' in Syria's Deir ez-Zor
13:21 GMTIraq Arrests Activists, Ministry Employee for Calls to Normalise Ties With Israel
13:20 GMTMali to Explore New Security Partnerships As France Ends Sahel Operation
13:18 GMTMerkel's Potential Successor Laschet Reveals His Vote Preference in Election Blunder
13:11 GMTWomen to Dominate Iceland's Parliament for First Time Ever, Reports Suggest
13:09 GMTBlast Kills Taliban Intelligence Officer in Eastern Afghanistan, Source Says
13:00 GMTGermans Head to Polls to Choose New Bundestag
12:51 GMTDozens of New Yorkers Stage Anti-Vaccine Protest at a Food Court Chanting F**k Joe Biden
12:41 GMTFour Inmates Dead, One Injured in Attempted Jailbreak in Philippines, Reports Suggest
12:40 GMTVirginia Giuffre to Reportedly Hand Prince Andrew Secret Doc Able to Defeat Her Lawsuit
12:37 GMTRussia Scrambles Three Su-35 Jets to Escort US B-52 Bomber Approaching Border in Pacific Ocean
12:32 GMTCyclone Gulab Likely to Make Landfall in India on Sunday Evening
12:21 GMTUN Chief Warns 'Humanity Unacceptably Close to Nuclear Annihilation'
12:09 GMTKremlin Says It Hopes for Consistency on Minsk Agreements From Germany After Merkel Leaves
12:02 GMTRussian Presidential Spokesman Says Gazprom Fulfilling All Obligations
11:54 GMTLabour Leader Says It's 'Not Right' to Say Only Women Have a Cervix
11:43 GMT'F**k Them': Carlson Responds to Yet Another Call to Fire Him Over 'Great Replacement' Theory
11:42 GMT'Piece of Scum': UK Labour Deputy Leader Lashes Out at Tories
11:14 GMTUK Transport Minister Calls on Britons to Behave Normally, Says There is No Shortage of Fuel
11:12 GMTHamas Has No Place in Sudan But Will It Give Up on Former 'Base'?