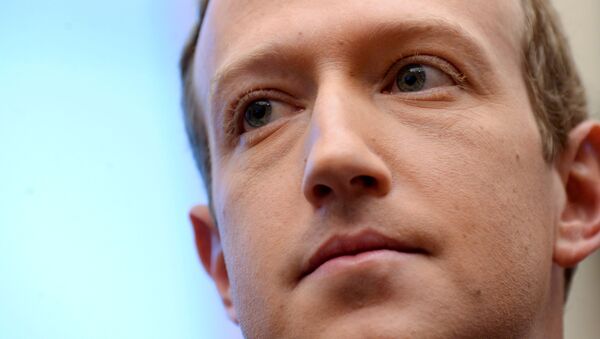 Despite most media outlets calling the 3 November election for Democratic nominee Joe Biden, vote counting has not yet concluded and campaigns for congressional seats are still ongoing. Social Media giants, in their clampdown on alleged misinformation, have restricted the use of political adverts.

Facebook informed political strategists on Wednesday that the social media platform would be extending its ban on political ads for a further month, as the state of Georgia is poised to enter into two Senate seat runoffs that will determine partisan control of the US Congress.

“Given the ongoing conversation about the US presidential election, we’re continuing to temporarily pause all social issues, electoral or political ads in the US”, Facebook ad representatives said in the announcement, according to emails seen by POLITICO.

“While multiple sources have projected a presidential winner, we still believe it’s important to help prevent confusion or abuse on our platform."

The email continued by saying that advertisers can expect the temporary pause to "last another month, though there may be an opportunity to resume these ads sooner".

In the email, a representative from Facebook said they would “notify” strategists when the restriction would end. They also urged clients to push their message through "organic posts", rather than paid digital ads.

Facebook officials still maintain that the ban will not be extended indefinitely and describes the move as a “temporary pause”.

The news of the ban extension for several more weeks has also been added to its blog post on the ad policy.

Following Election Day, Facebook and Google both banned all political ads from their platforms in an attempt to reduce the spread of what they claim to be misinformation surrounding the election. The policy has received widespread criticism from digital strategists from both Democrats and Republicans, as several seats currently remain in play, including the two Senate runoffs in Georgia.

When the policy was announced prior to the election, a Democratic official familiar with the Georgia Senate campaign inquired with Google for budgeting advice for the 4 January runoffs, with the company telling them not to budget for advertising at all, leading to concern within the party that the ban on ads could run deep into 2021, Politico reports.

In the lead-up to the election, political commentator Tucker Carlson accused the "tech monopolies" of overtly restricting the sharing of damaging information about Joe Biden, following allegations of corruption in the New York Post, while banning Donald Trump ads.

Heck, they even hid damaging information on Biden.

Nonetheless, Facebook banned our page from political advertising in August.

Thanks for highlighting this issue, @TuckerCarlson! pic.twitter.com/uhow0D9YF2

​If Democrats win both runoff races, this will see a 50-50 split Senate, with projected Vice President-elect Kamala Harris putting them over the line following her inauguration. If Republicans secure just one or both seats, they will maintain their majority.

Facebook brought in a ban on new political ads a week prior to the election on 3 November, but the new policy initially saw hundreds of pre-approved digital ads removed. This left all manner of campaigns, including both presidential runs, with scrubbed ads for days. The company called the ban a “technical glitch” but it led to fears that the platform may look to ban ads entirely.

This comes amid concerns over "censorship" on the part of big tech companies who have increasingly intervened on user posts, adding captions to those that they deem to contain misleading information.

Follow his apparent election defeat, Donald Trump's tweets claiming widespread voter fraud in favour of his opponent were covered with official captions describing them as "disputed".

A guy named Al Schmidt, a Philadelphia Commissioner and so-called Republican (RINO), is being used big time by the Fake News Media to explain how honest things were with respect to the Election in Philadelphia. He refuses to look at a mountain of corruption & dishonesty. We win!

​Last month, Facebook banned all adverts containing messages that explicitly discourage others from getting vaccines or contain anti-vax conspiracy theories.