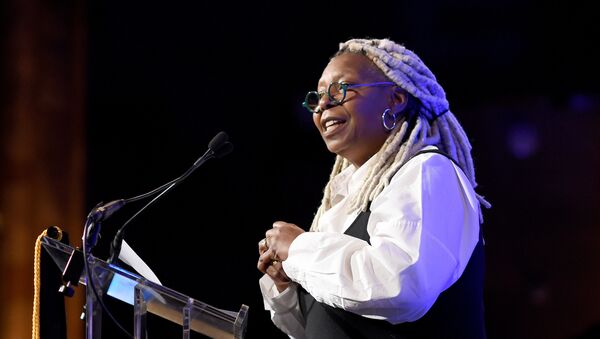 Lilia Dergacheva
All materialsWrite to the author
Although quite a few rejoiced, just like 64-year-old comedian Whoopi Goldberg did following the announcement of the projected presidential election results on Saturday, many others, including Joe Biden's supporters, could hardly agree the blue camp was not emotional because they have been persistently upset by the GOP president's win in 2016.

Co-host of ABC chat show "The View" Whoopi Goldberg has taken a jab incumbent President Donald Trump's supporters, urging them to "suck it up" and accept their candidate's defeat. She addressed those who fail to "believe" the ballot count, which Trump had questioned even before his Democratic challenger Joe Biden was first projected to grab a narrow win in the presidential race.

"To all those people who don't believe that Americans actually got out and voted, let me say this to you", she started off by saying, going on to draw parallels with how Trump's 2016 rival Hillary Clinton approached the election results.

"When you know who was elected four years ago, Hilary Clinton 'didn’t whine', and nor did she say, 'Hey, wait a minute, this doesn't feel right, stop the count'. She didn't say, 'This doesn't feel right, I'm not going for it'. She didn't say any of that. So all of you, suck it up. Suck it up like we sucked it up", the 64-year-old comedian and TV personality persisted, unable to conceal her elation over the projected results.

Referring to GOP supporters' disbelief, Goldberg went on to advise them to take the issues they find controversial to court, so that the latter can decide if there is "something" to look into.

For the rest, she said, the failure by many to acknowledge that Biden clinched the White House stands questions "all these Americans who voted legally, came out and stood and voted".

"How dare you question it?", the anchor fumed, further coming up with a tip deemed by many as weird and quite convoluted:

"Grow the pair for him that he can't grow for himself", Goldberg said, proceeding to say: "Because this is ridiculous, you're not sure that he won. You're bringing into question all these Americans who voted legally, came out and stood and voted. How dare you question it?"

However, netizens en masse rushed to point to The View's hypocrisy, with one charging that they, vice versa, "complained, mocked, whined and disrespected the administration for four years…they never 'sucked it up'".

"That is exactly what we are doing taking it to the courts. We found something! Thank you! And suck that up", another frustrated user weighed in, with many more finding Whoopi's comments irritating:

"Ha! Y'all don't know us (70+ MILLION freedom-lovers strong) at all. Buckle up, buttercups", another posted.

"Such hypocrisy, the Dems didn't suck it up when Trump won. Complained for four years! I'm disappointed with both parties!", some other person lamented.

Even apparent blue voters couldn't agree with Goldberg, saying they "DID sit there and say he [Donald Trump] didn't win".

But Whoopi, we DID sit there and say he didn't win. We claimed collusion. We fought against it for four years! We can't say "suck it up", we just can't. HE needs to suck it up yes! but we can't claim we actually did.

Some commenters touched upon why "the corrupt" Hillary Clinton had opted out of open calls for a recount:

Only reason the corrupt HRC didn't question the 2016 election results was because she knows they cheated and they failed, when they didn't think she could lose. They specifically didn't want a recount (nor an audit) because they would have been caught then.

Donald Trump rejected the election results after the former vice president was projected as being the president-elect.

Before the final results were projected, the Trump campaign had filed a number of lawsuits alleging voter fraud in several battleground states, as well as insisting that Republican observers were not granted "meaningful access" to ballot-counting locations in several key states. Most of the Trump campaign's lawsuits were filed in Pennsylvania, Arizona, Nevada, Georgia, and Michigan, states where either Biden's margin of victory is slim, or where the final results after mail-in voting have yet to be confirmed.

The lawsuits largely attempted to halt the vote-counting procedures or disqualify piles of ballots, with Trump poised to continue to fight in court. The Trump team also said it was set to demand a recount in Wisconsin, with a recount in Georgia also pending.