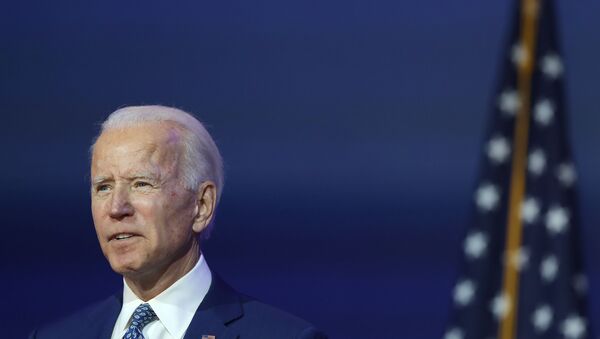 US media outlets have declared Democratic candidate Joe Biden the winner of the election. Incumbent President Donald Trump has claimed on multiple occasions that the election was conducted fraudulently, and the president's lawyers have already begun filing litigation claims in courts across the United States.

The Biden team are weighing the option of suing the General Services Administration (GSA) over the delay in recognising the outcome of the election as projected by US media and transferring the presidential powers from Donald Trump to Joe Biden, Reuters reported citing a member of the team.

Head of the GSA Emily Murphy has so far refused to take action arguing that it's unclear who indeed won the election.

On Saturday, major US outlets declared Joe Biden the winner of the US election. However, Donald Trump rejected the results and launched a series of lawsuits to contest the results in some states, alleging voter fraud.

Attorney General William Barr has given the green light to federal attorneys to launch probes into claims of voting irregularities.

French President Emmanuel Macron said he had congratulated Joe Biden on his victory in the US presidential election and stressed they had much to do to advance the priorities of joint cooperation.

Republicans moved to within two seats of retaining control of the US Senate, with the Democratic candidate in the state of North Carolina, Cal Cunningham, announcing in a press release that he had phoned incumbent Senator Thom Tillis to concede.

“I just called Senator Tillis to congratulate him on winning re-election to a second term in the US Senate and wished him and his family the best in their continued service in the months and years ahead,” Cunningham said on Tuesday.

With 98 percent of ballots counted, Tillis led Cunningham by more than 95,000 votes, according to the latest results.

Almost 70 percent of Republicans are convinced that the US presidential election was not free or fair, a Politico/Morning Consult poll revealed.

The figure of 68 percent represents double the number of voters from the same party who believed before Election Day on November 3 that the result would not be free or fair, the pollster said in an article on Tuesday.

By contrast, 96 percent of Democrats who were asked told the same pollsters they were convinced of the fairness of the election process - a massive rise from the 52 percent of party voters who said that before the election.

However, a bipartisan majority of 69 percent - more than two-thirds - told the poll they believed the United States was now going in the wrong direction, the poll reported.

Legal advisers to projected US President-elect Joe Biden said that the Republican incumbent Donald Trump has no evidence to support his allegations of election fraud and is unable through courts to reverse the transition of power to the new Democratic administration.

Joe Biden, who has been projected by US media to be the next president of the United States, participated in congratulatory calls with the leaders of four European countries, the Biden campaign said in a statement.

"President-elect Joe Biden took part in separate congratulatory calls today with the leaders of France, Germany, Ireland and the United Kingdom," the statement said on Tuesday.

"Federal Chancellor Angela Merkel had a telephone conversation with US President-elect Joe Biden today. She congratulated him, as well as Vice President-elect Kamala Harris on winning the elections. The federal chancellor expressed hope for close and trusting future cooperation," Seibert told reporters.

He said Merkel and Biden had agreed that transatlantic cooperation was of great importance in the face of numerous global challenges.

US Republicans flipped a ninth seat in the House of Representatives on Tuesday after incumbent Democratic Congressman Harley Rouda conceded defeat in California's Orange County, traditionally a Republican stronghold where Democrats won every seat in 2018.

“We did not win this election,” Rouda said in a statement conceding the race to his Republican opponent, County Supervisor Michelle Steel.

Some 29 percent of Americans who voted for Joe Biden claim their decisions were driven not by enthusiasm for the former vice president but by a desire to remove President Donald Trump from office, a poll by Rasmussen Reports said on Tuesday.

For Biden voters, the most important issue to their vote in descending order was: Trump’s overall job performance (41 percent); the novel coronavirus (35 percent); racial justice (8 percent); the economy (7 percent) and national security (5 percent). Illegal immigration was barely mentioned, according to the release.

For Trump voters, the most important voting issue was: the economy (42 percent) and Trump’s overall job performance (36 percent), while the coronavirus pandemic was considered most important by just 7 percent, the release said.

I just spoke to @JoeBiden to congratulate him on his election. I look forward to strengthening the partnership between our countries and to working with him on our shared priorities – from tackling climate change, to promoting democracy and building back better from the pandemic.

In a statement, Erdogan told Biden that he wanted "to further develop and strengthen" the countries' bilateral ties.

"I congratulate you on your election success and convey my sincere wishes for the peace and welfare of the US people," Erdogan said in a statement published by his office.

Erdogan also sent a message to Trump, saying that "no matter how the official election result is certified," he wanted to express thanks for his "warm friendship" during his four-year term.

WE ARE MAKING BIG PROGRESS. RESULTS START TO COME IN NEXT WEEK. MAKE AMERICA GREAT AGAIN!

"70 million Americans have voted for Donald Trump. As in other countries, including in Europe, a whole part of the population does not yet feel included in the ecological transition. It cannot be ignored and the whole question is to have a just transition", French Environment Minister Barbara Pompili wrote on Twitter.