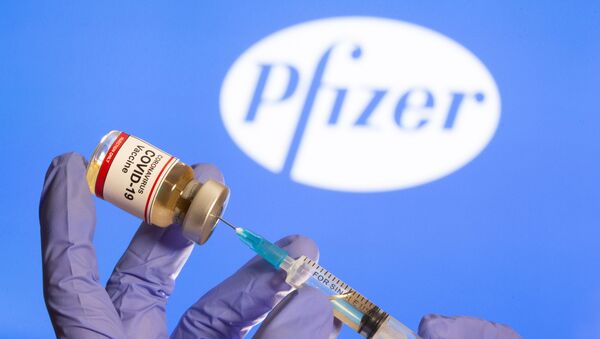 Lilia Dergacheva
All materialsWrite to the author
According to the incumbent president, the announcement of progress on a coronavirus vaccine was likely specially timed to not be made before the 3 November presidential vote, so as to undermine his ratings.

US President Donald Trump has reacted to pharmaceutical giant Pfizer Inc’s praise of its new COVID-19 vaccine, accusing the drug maker, the Democrats, and the US Food and Drug Administration of joining efforts to conspire to intentionally delay the announcement of the coronavirus vaccine until after the recent elections. POTUS alleged there were apparent political motives behind the timing.

“As I have long said, @Pfizer and the others would only announce a Vaccine after the Election, because they didn’t have the courage to do it before. Likewise, the @US_FDA should have announced it earlier, not for political purposes, but for saving lives”, Trump tweeted.

“The @US_FDAand the Democrats didn’t want to have me get a Vaccine WIN, prior to the election, so instead it came out five days later – As I’ve said all along!” POTUS added.

Pfizer has insisted in response that its work on the vaccine is in no way politically motivated, arguing that it has been “moving at the speed of science”. The company said that it learned about the interim results of the trials on Sunday, after its independent data monitors met to discuss them. It praised their vaccine on Monday as highly effective, and potentially exceeding expectations.

The Big Pharma member initially moved not to join the Trump administration’s Operation Warp Speed, which aims to assist in financing vaccine manufacturers’ research. It noted that it had pumped $2 billion of its own finances into testing and boosting its manufacturing capacity. Yet, in July, Pfizer signed an agreement to supply the US with 100 million doses for $1.95 billion, provided the vaccine is greenlit by the FDA.

According to the company’s management, its partial involvement in Operation Warp Speed is about making a contribution to the White House’s goal to have 300 million doses of COVID-19 vaccines ready in the foreseeable future.

“We’re in a position potentially to be able to offer some hope”, Dr Bill Gruber, Pfizer’s senior vice president of clinical development, was cited by the Associated Press as saying. “We’re very encouraged”.

The pharmaceutical giant is currently working to receive emergency-use approval from the FDA for the vaccine they have been developing in partnership with the German firm BioNTech.

Monday’s announcement is meanwhile not seen as a clear indication that a vaccine is imminent, as the FDA’s strict safety regulations first have to be met. As for the interim trial results, Pfizer didn’t go into much detail, providing no particular breakdowns.

However, Dr Anthony Fauci, the US government’s top infectious disease expert, referred to the results pointing to 90% effectiveness as “just extraordinary”, admitting that “not very many people expected it would be as high as that”.

Earlier, during his re-election campaign, Trump repeatedly suggested that a vaccine could be ready by the Election Day.

“President Trump told us for some time we would be getting a Vaccine by the end of the year and people laughed at him, and here we are with Pfizer getting FDA approval by the end of this month. He was right.” @MariaBartiromo

Days after, when the news hit the headlines, he tweeted in elation:

Projected President-elect Joe Biden, for his part, also welcomed the news, but urged citizens to not ignore face covering and social distancing  in the run-up to “a dark winter”, while vaccines are still in the making.