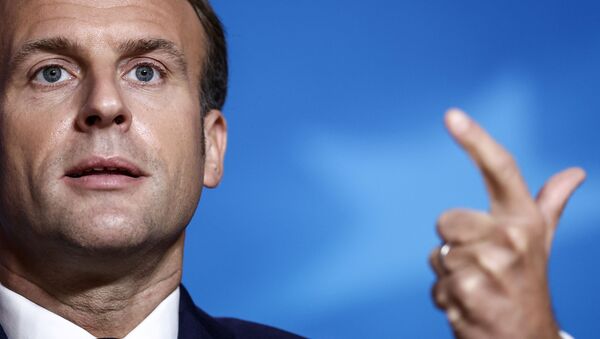 Lilia Dergacheva
All materialsWrite to the author
The Elysee's statements follow a number of fiery exchanges between French President Emmanuel Macron and his Turkish couterpart Recep Tayyip Erdogan, including on the issue of the ethnic Armenian enclave Nagorno-Karabakh, and threats of Islamist terrorism.

France insists that Turkey should stop any kind of provocations regarding the Armenian-Azeri conflict in the unrecognised republic of Nagorno-Karabakh, French President Emmanuel Macron has said in a statement, which also has it that Ankara should make sure a future accord will not be compromised.

The palace added it was studying the details of a newly-clinched ceasefire deal in the Nagorno-Karabakh area, noting that any lasting agreement in the region mostly populated by Armenians should by all means take into account and "preserve" Yerevan's interests, remarked the French head of state, who has of late more than once crossed swords with Turkish President Recep Tayyip Erdogan on a number of issues, including Nagorno-Karabakh, radical Islam, as well as the conflicts in Syria and Libya.

On Monday, Prime Minister of Armenia Nikol Pashinyan, Azerbaijani President Ilham Aliyev, and his Russian counterpart Vladimir Putin signed a joint statement, to end bloody military clashes in the Nagorno-Karabakh region, which resumed after years of quiet on 27 September.

The agreement took effect at 21:00 GMT on 9 November. The ceasefire will be observed by 1,960 Russian peacekeepers and a specially set-up centre for ceasefire control. Russian peacekeepers will be deployed along the line of contact in the Nagorno-Karabakh region and along the Lachin corridor. The sides of the dispute remain in the positions they currently hold, but Armenia has to hand over the territories of Agdam and the Calbajar District in eastern Karabakh, and the Lachin District in the region's west by certain deadlines, with the last one slated for 1 December 2020.

As the situation in Nagorno-Karabakh escalated, Yerevan and Baku accused each other of intentionally provoking military clashes. Azerbaijan claimed that the Armenian Armed Forces had shelled settlements on the contact line in the area and Yerevan, which supports the breakaway enclave, said the area had been subjected to attacks from Azeri positions.

The Armenian Ministry of Defence has repeatedly said that multiple Turkish planes took part in the conflict on the side of Baku, with Turkish F-16s supporting Azerbaijani jets and drones during strikes against Armenian troops and military bases. Ankara had indeed stressed that it was ready to support Baku "both in negotiations and in combat", suggesting that an attack on Azerbaijan equals an offensive against its ally Turkey.