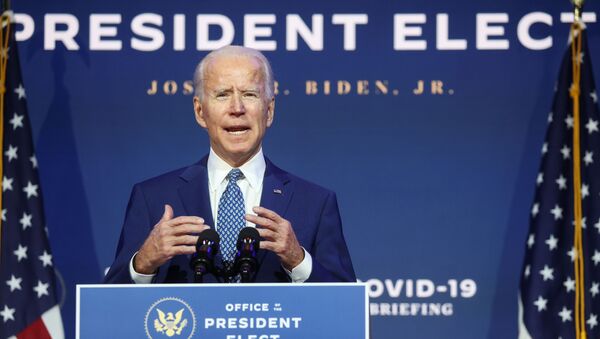 Morgan Artyukhina
All materialsWrite to the author
Democratic President-elect Joe Biden has signaled that he is beginning the process of forming a transition team ready to take over running the United States in January 2021, even if Republican US President Donald Trump hasn't conceded his loss by then.

Biden told reporters in his hometown of Wilmington, Delaware, on Tuesday that "we don't see anything that's slowing us down" in the process of preparing a transition team, even as some resources typically available to presidents-elect between the November election and January 20 inauguration remain outside his reach, thanks to obstinacy from Trump.

Among those things denied to Biden have been daily presidential intelligence briefings and additional funding, which he described as "useful, but it's not necessary."

Biden's office has already released his "plan to combat coronavirus" once he takes office, and he told reporters Tuesday he hoped to release some names for cabinet positions by November 26, which is the Thanksgiving holiday in the US. However, some agency figures have already sounded off about whether or not they will stay or go under Biden, with NASA chief Jim Bridenstine saying he would no longer head the US space agency, and Anthony Fauci, director of the National Institute of Allergy and Infectious Diseases (NIAID) at the National Institutes of Health (NIH) and a member of Trump's COVID-19 task force, saying he would stay on.

Biden has been declared the winner of the November 3 election by all major US media outlets and congratulated on it by many foreign governments, but Trump has remained adamant that the election was stolen from him and implemented extensive litigation in states across the country aimed at forcing recounts and revisions to ballot totals he believes will change the outcome in his favor.

“We all know why Joe Biden is rushing to falsely pose as the winner, and why his media allies are trying so hard to help him: they don’t want the truth to be exposed. The simple fact is this election is far from over," Trump said in a Saturday statement following Biden's victory speech.

“I just think it’s an embarrassment, quite frankly,” Biden said Tuesday about Trump's stubbornness. "I don't see a need for legal action, quite frankly."

"I think it will not help the president's legacy. I think that I know from my discussions with foreign leaders thus far, that they are hopeful that the United States' democratic institutions are viewed once again as being strong and enduring," Biden added.

Earlier on Tuesday, US Secretary of State Mike Pompeo also doubled down, telling reporters "there will be a smooth transition to a second Trump administration."