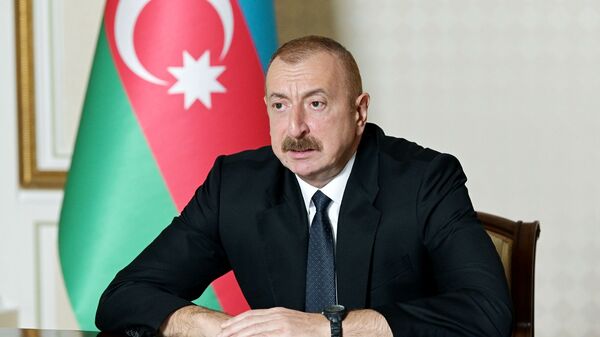 © Photo : Press-service of the Azerbaijani president
/
Go to the photo bank
Subscribe

Asya Geydarova
Editor
All materialsWrite to the author
The Russian military earlier said its Mi-24 helicopter was downed from a man-portable air defence system (MANPADS) over the territory of Armenia, which Azerbaijan has claimed responsibility for, saying it shot down the aircraft by mistake.

Azerbaijani President Ilham Aliyev called his Russian counterpart Vladimir Putin on early Tuesday to apologise for the incident with the Russian Mi-24 helicopter on Armenian-Azerbaijani border.

Aliyev assured Putin that those responsible for the incident will be punished, and Moscow will be informed.

The Azerbaijani side earlier admitted that it accidentally shot down a Russian helicopter, apologised and expressed its readiness to pay compensation to Russia. In a letter to Russian Defence Minister Sergei Shoigu, Azerbaijani Defence Minister Zakir Hasanov said that he downed Russian Mi-24 helicopter had been flying in the dark, at low altitude and outside the air defence radar detection zone.

Baku added that the incident was not directed against the Russian side.

Two crew members died as a result of the crash, one was evacuated with moderate injuries.