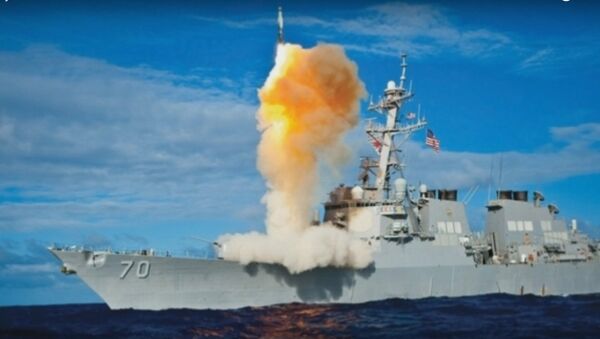 © YouTube/Defense Daily
Subscribe
International
India
Africa
Morgan Artyukhina
All materialsWrite to the author
The US Army has moved to adapt another missile from the US Navy’s arsenal for use as a ground-launched weapon: the RIM-174 Standard Extended Range Active Missile (ERAM), better known as the Standard Missile 6 (SM-6).

On November 6, the Army announced it had awarded Lockheed Martin a $339 million contract to adapt the SM-6 as a ground-launched weapon.

According to the news release, the missile will fill a mid-range capability (MRC) role between that of the Precision Strike Missile (PrSM) and the Long-Range Hypersonic Weapon (LRHW), and will hopefully be fielded by the end of fiscal year 2023. Both of those weapons are currently in development.

The PrSM’s delay until at least fiscal year 2024 has sent the Army looking for replacements to fill the capability gap, but it’s unclear if the SM-6 is envisioned as filling this role or is intended to supplement another weapon chosen to do so.

The SM-6 was originally designed for use as an air defense weapon capable of shooting down aircraft, incoming missiles and even terminal-phase ballistic missiles, up to 34,000 feet up and 150 miles away. The missile has also been adapted to hit naval surface targets.

The US Army has also begun adapting another US Navy missile, the BGM-109 Tomahawk cruise missile, for use as a land-based strike weapon. However, until August 2019, Washington was constrained by the limitations of the Intermediate-Range Nuclear Forces (INF) Treaty, which the Trump administration shredded, declaring without proof that Russia had violated the agreement. However, unless the SM-6’s range is extended, it will remain within the parameters of the now-discarded treaty.