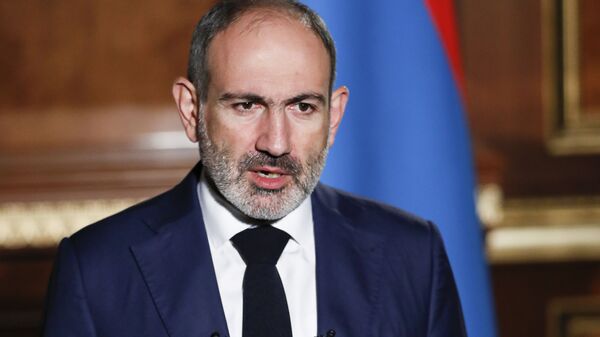 Asya Geydarova
Editor
All materialsWrite to the author
Protesters in Armenia's capital reportedly headed to Prime Minister's house after they could not find Nikol Pashinyan at the government headquarters, following his joint statement with the leaders of Azerbaijan and Russian on ending the Karabakh war.

According to a Sputnik correspondent, protesters in Yerevan are voicing their intent to march to Government House Number 1, which is the official residence of the prime minister in Yerevan; some remain at the government building.

Alleged footage from the protest has emerged on social media. According to media reports, the government building is under full control of the protesters.

📹 | Demonstrations against #Armenia|n PM Pashinyan in #Yerevan after his signing of a ceasefire deal with #Azerbaijan on #Karabakh.pic.twitter.com/Ys7ON4IQe1

The Prime Minister of Armenia signed an agreement to end the war with Azerbaijan, in response protestors in Yerevan, Armenia have broken into a government building and are demanding the Prime Minister leaves#Armenia pic.twitter.com/fwc3iYKJIT

Sputnik Armenia reported that protesters in Yerevan attacked President of Armenia’s National Assembly Ararat Mirzoyan, pulling him out of his vehicle and beating him up.

Following the unrest, Prime Minister Nikol Pashinyan said that all the initiators of the current protests against the new deal will be held accountable.

Pashinyan earlier announced he signed a statement, together with Russian President Vladimir Putin and Azerbaijani President Ilham Aliyev, on ending hostilities in Karabakh. According to the Armenian prime minister, the decision, though painful, was made based on the assessments made by people who are most aware of the military situation.