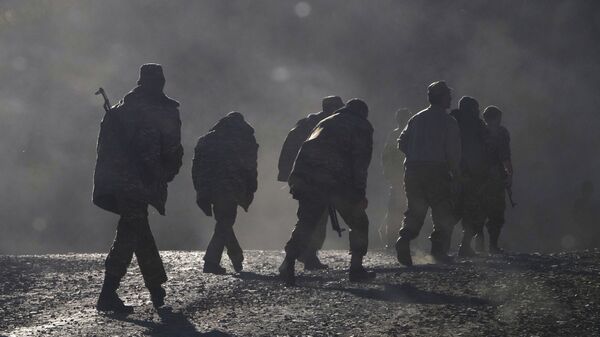 Asya Geydarova
Editor
All materialsWrite to the author
According to the Armenian Prime Minister, Nikol Pashinyan, the decision was painful for him, but had to be made in the current situation in Nagorno-Karabakh.

Russian President Vladimir Putin said that in accordance with the joint statement, Russian peacekeepers will be deployed in Nagorno-Karabakh along the corridor connecting the region with Armenia and along the contact line.

Azerbaijani President Ilham Aliyev said that the agreement on cessation of hostilities in Karabakh puts an end to the settlement of the conflict. He called the new ceasefire agreement historic and said it would end the bloodshed and lead to long-lasting peace.

The joint statement came after the Azerbaijani side said it seized control of the Shushi (Shusha) - the second-largest city in Nagorno-Karabach, as the Azerbaijani forces were closing in on the capital of the self-proclaimed republic. Baku said it would end fighting if Pashinyan guarantees that the Armenian troops will be withdrawn from the regions of Aghdam, Kalbajar and Lachin.

President of Armenia's National Assembly Ararat Mirzoyan was in his car when the protesters clashed with his guards, pulled him out of the vehicle, and beat him up, Sputnik Armenia reported.

Tonoyan called the signing of the new ceasefire declaration "the most shameful page in our history".

"I've learned about the statement that was signed by the PM of Armenia, Presidents of Azerbaijan, and Russia. I tried to prevent this catastrophe & disrupt betrayal but the text was published w/the consent of Artsakh President. Still, there is a way to save our national dignity", Babayan said on Twitter.

"Taking into account the difficult situation and in order to avoid further mass casualties and the loss of Artsakh [Republic of Nagorno-Karabakh] I have given my consent to end the war one hour earlier", Arayik Harutyunyan wrote on Facebook.

"A separate statement of the President of the Russian Federation on this matter is expected to be released in the near future", Kremlin spokesman Dmitry Peskov said.

"On 10 November, at 0.20 am [20:20 GMT on Monday] subdivisions of the armed forces of Armenia subjected the city of Tartar to artillery fire. One civilian was injured", Azerbaijan's Defence Ministry said in a statement.

The Prosecutor General's Office of Azerbaijan announced that it had launched a probe into the incident.

"...a case was opened under the articles ‘murder of two or more persons in a life-threatening manner on the basis of national, racial or religious hatred or religious fanaticism’ and ‘unleashing or waging an aggressive war.’ The case has been passed to the Investigative Committee of Armenia", the press service of Armenia's Prosecutor General's Office said in a Monday statement.

"The Prosecutor General's Office of Azerbaijan has started an immediate investigation of the incident related to the downing on 9 November at 6:30 pm [14:30 GMT] of a Mi-24 helicopter belonging to Russia on the Nakhchivan direction of the Armenian-Azerbaijani border. Depending on the results, a legal and objective decision will be made. In connection with this issue, the General Prosecutor's Office of the Republic of Azerbaijan expresses deep regret and condolences to the families of the deceased crew members, wishes a speedy recovery of those injured", the statement says. 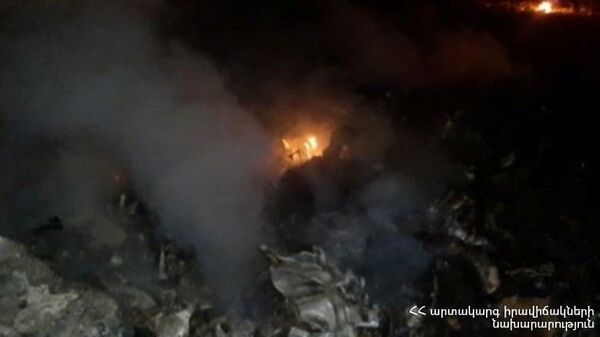 "Fight for Shushi continues", the prime minister said on Facebook.

"Turkey has not remained silent and will not remain silent regarding the occupation of the Azerbaijani land. With the liberation of Shusha, our hopes have strengthened manyfold. The banner of the struggle will not be lowered until the entire Karabakh is liberated from the occupation, including the return of Kalbajar and Lachin to their real owners", Turkish President Recep Tayyip Erdogan said at a Turkish ambassadors conference in Ankara.

The city of Shushi is completely beyond the control of the Karabakh forces, an assistant to the Nagorno-Karabakh president stated.

"The enemy is advancing upon Stepanakert, and the very existence of the capital is being threatened", presidential spokesman Vaghram Pogosyan said on Facebook.

Shushi is the second largest town in the republic.

The Armenian Defence Ministry has shared a video allegedly depicting strikes by Armenian forces in the Khojavend direction of the front.

Azerbaijan does not want the Nagorno-Karabakh conflict to continue and will stop combat activities if Armenian Prime Minister Nikol Pashinyan guarantees that the Armenian troops will be withdrawn from the regions of Aghdam, Kalbajar and Lachin, Azerbaijani President Ilham Aliyev said on Monday in an interview with UK media.

“If Pashinyan, him personally, not his foreign minister, him personally, says Armenia withdraws its troops from Aghdam, from Kalbajar, from Lachin, the three remaining regions which they have to liberate and give us a timetable, we will stop immediately. We don’t want to continue this war,” Aliyev said, as quoted by the official Azertac news agency.

The Azerbaijani armed forces have seized control over some more territories in Karabakh, President Ilham Aliyev said on Monday.

"On Saturday, we announced the topics that had been discussed during the phone talks of presidents Putin and Erdogan. I have nothing to add to this. They did touch upon Karabakh," Peskov told reporters, when asked to comment on Turkey's alleged idea for a new contact group on Karabakh conflict.

Putin and Erdogan discussed the situation in the crisis-torn region on Saturday. According to the Kremlin, the leaders confirmed commitment to cooperate in order to find a peaceful solution to the Armenian-Azerbaijani conflict.

According to CNN Turk, Putin welcomed the Turkish leader's offer, and bilateral negotiations on the Karabakh crisis settlement could be launched already in the coming days. The new working group is expected to focus on measures to be introduced after a ceasefire, which will be due to promote the political settlement. The broadcaster added that the foreign ministers of Russia and Turkey held phone talks after the national leaders' negotiations.

Baku, which is involved in a conflict with Armenia in Karabakh region, may consider accepting military aid from Ankara if Azerbaijan is threatened, Azerbaijani President Ilham Aliyev said.

Azerbaijan will not need any such aid if the things continue as they are now, the president said.

However, Baku and Turkey have an agreement on military help in case of aggression, similar to the agreements Armenia has with Russia, so Baku may consider using Turkey's help if it is threatened, Aliyev said in an interview with UK media.

The Armenian Defence Ministry's spokesman said on Monday that an operation to eliminate an Azeri armed forces' disposition was underway in the Karintak village near the city of Shusha.

"A disposition [of the Azeri armed forces], which was found in the Karintak area, is being eliminated through artillery strikes. The enemy is suffering significant losses," Atsrun Hovhannisyan said, as quoted by the Karabakh's official infocenter.

The emergencies service of the unrecognized Nagorno-Karabakh Republic (NKR) accused the Azeri armed forces on Monday of launching cluster rockets on Stepanakert, the NKR capital, noting that no one was injured.

"After midnight, the enemy launched several cluster rockets at Stepanakert, damaging the civilian infrastructure. No one was injured in the capital," the NKR service for emergency situations said in a statement.

The situation was relatively calm in other NKR settlements, the service noted.