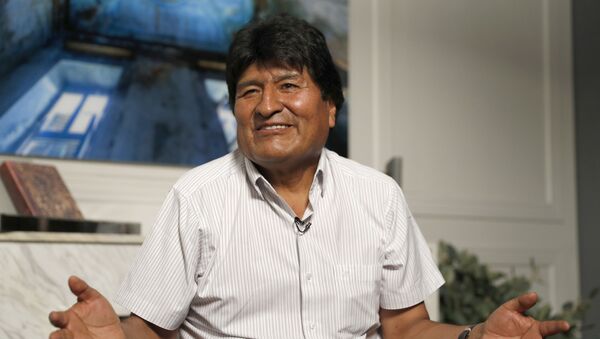 Max Gorbachev
All materialsWrite to the author
At the end of October, a judge in Bolivia terminated the arrest warrant for Morales that was issued following the general election in October 2019. Back then, the politician was accused of sedition and terrorism.

Bolivia's former President Evo Morales has returned to the country after a year-long exile. Thousands of supporters of the ex-president, including indigenous peoples, flooded the streets in the southern border town of Villazon to meet the politician. The 54-year-old was instantly surrounded by journalists and supporters after he crossed into Bolivia and caused a squall of applause and cheers.

🔻Evo Morales has crossed over the Quiaca-Villazón international border, marking his return and the social movements' victory over the 12 month coup. pic.twitter.com/Xtbjvz3OZo

​Before embarking on the trip, he thanked the government of Argentina for letting him stay in the country and said that he was filled with joy to return to his homeland.

"Today is an important day in my life, returning to my homeland that I love so much fills me with joy", Morales tweeted.

​The politician, who was at the helm of Bolivia for 13 years, had to flee the country following the disputed general election in 2019, which was won by Morales and his MAS party. However, his opponents claimed the election was rigged, an allegation that was backed by a report from the Organisation of American States. Following large-scale protests, Morales stepped down, branding his resignation a US-backed coup d'etat and fled to Argentina, where he was granted political asylum.

He decided to return after his party won in the re-run of the general election in October 2020.