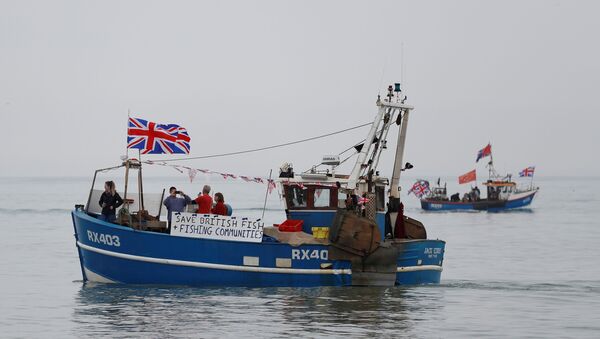 Irina Acheeva
correspondent
All materialsWrite to the author
Trade talks between the EU and the UK after Brexit have been at an impasse for months due to broad differences over fishing quotas, a level playing field, and governance.

London is ready to achieve a sensible compromise on fishing, UK Environment Secretary George Eustice has said, adding that there is goodwill on both sides to advance towards a Brexit trade deal.

"There are still differences. On fisheries we've always been open to doing a sensible approach, looking potentially at agreements that might span a couple, three years for instance. The issue will become what are the sharing arrangements, how much mutual access do we allow in one another's waters and that's obviously a discussion that will happen annually but there may also be a partnership agreement that sets out the ground rules as to how we will work on that", Eustice said.

The statement comes after London and Brussels agreed to resume talks on their future commercial relations following months of deadlock. The UK and EU continue to disagree on several key issues, including governance, fisheries, and level playing field, the set of common rules and standards that prevents companies in one country from undercutting another.

Brexit: Irish PM's Non-Denial of EU Plot to Block Flights if UK Doesn't Cave on Trade
Any deal coming from those negotiations, including the one recently signed with Japan, will have to wait for the conclusion of the transition period agreed upon by London and Brussels as part of the Withdrawal Agreement, which is due to expire on 31 December.

After leaving the European Union on 31 January, the UK started trade negotiations with the US, Japan, Australia, and the EU in an attempt to compensate for its departure from the European bloc.