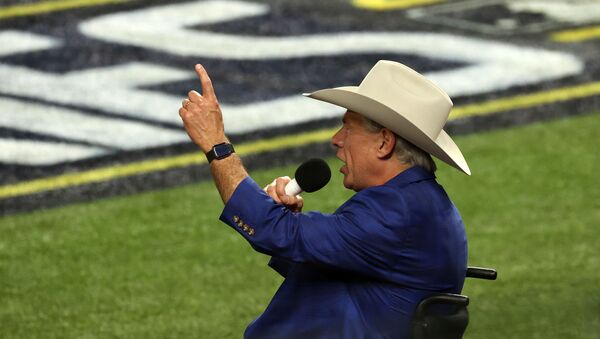 James Tweedie
All materialsWrite to the author
Texas Attorney-General Ken Paxton praised authorities for bringing the alleged fraud to light amid "unprecedented" voter fraud in Tuesday's presidential election, the result of which is contested by incumbent Donald Trump and Democrat candidate Joe Biden.

A Texas social worker has been charged with election fraud after registering and casting mail-in ballots for 67 mentally-disabled residents at a care home without their consent.

Kelly Reagan Brunner was charged with 134 felony counts for "purportedly acting as an agent and of election fraud," a statement on behalf of Texas Attorney-General Ken Paxton said.

Paxton praised county and state authorities including the Limestone County Sherriff's Office and Elections office, as well as the Department of Health and Human Services, for "their commitment to ensuring a free and fair Presidential election in the face of unprecedented voter fraud."

Some of the residents at the Mexia State Supported Living Centre (SSLC) in Limestone County were so profoundly disabled that they were ineligible to vote in Texas, having been declared "totally mentally incapacitated" by a court.

"Brunner submitted voter registration applications for 67 residents without their signature or effective consent, while purporting to act as their agent," Paxton's office said. “None of the SSLC patients gave effective consent to be registered."

Texas law states that the only person who can register another to vote is a parent, spouse or child registered to vote in the same county, and they must be appointed as the agent by the person being registered. Brunner could face up to 10 years in prison if convicted.

"Registering citizens to vote or to obtain mail ballots without their consent is illegal," Paxton stressed. "It is particularly offensive when individuals purport to be champions for disability rights, when in reality they are abusing our most vulnerable citizens in order to gain access to their ballots and amplify their own political voice."

Republican Texas Governor Greg Abbott, a former state attorney-general and a disabled person, urged other states to root out ballot fraud and restore confidence in the democratic process.

“Election fraud is real. In Texas, we investigate and prosecute it," Abbott insisted. "All states must take election fraud seriously to ensure confidence in elections.”

But with Trump projected to win Texas by an overwhelming margin of around 650,000 votes, the alleged fraud in Limestone County would make little difference - and it was not reported which candidate Brunner had cast the ballots for.

At a press conference on Saturday in Philadelphia, the metropolis of the heavily-contested swing state of Pennsylvania, Trump's attorney and former New York mayor Rudy Giuliani introduced Republican election observers who said they witnessed apparent irregularities but were prevented from scrutinising the ballots.

Giuliani claimed that late boxer Joe Frazier, a staunch Republican, was still registered to vote in the city since his death in 2011, and that the father of actor and rapper Will Smith had voted twice there since his death. “I don’t know who he voted for because the vote is secret. In Philadelphia they keep the votes of dead people secret,” he said.

000000
Popular comments
This man is more possible a supporter of Trump. Mexicans living in Texas are economically illegal immigrants pardoned by the Texas governor and because of this, you supported the devil in order to get a plate of food and cleaning the gardens of the rich Texians. It is quite known in American that Mexicans exploit other Mexicans as it is the case with the majority of Latinos. Mexicans make money working for peanuts. They just want to have food to survive, so do not ask questions of why did they vote for Trump.