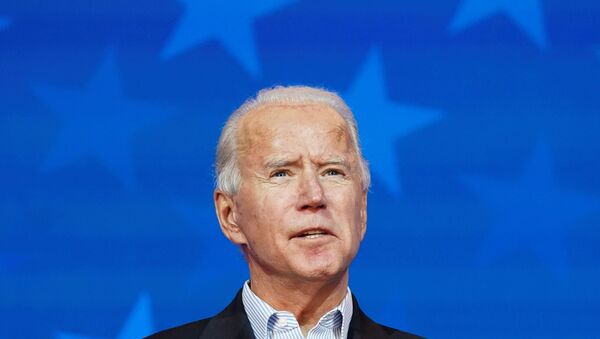 "I think it is so widespread that even if Biden is eventually elected by the Electoral College, I think it's going to weaken his [Biden’s] authority as president," Black said. "I have a feeling that he will be perceived as someone who did not actually win the election, it was just an election that was kind of rigged. So I think that's going to be a bit of a problem for him going forward if he is sworn in as president."

Black’s comments come after major US television networks projected that Democratic nominee Joe Biden has won the US presidential election. Biden claimed his victory in an address to the nation on Saturday in Wilmington, Delaware.

"The news media, the major broadcast networks have coordinated their efforts and they have all come out with a declaration that Joe Biden is the winner of the presidential campaign," Black said. "But the Constitution does not have a role for the news media in selecting the president that is all decided of the Electoral College."

The former lawmaker pointed out that at this point, no state has certified the election, adding that it certainly does help Biden that the national news media has projected him a winner.

"I think to some extent they felt a sense of pressure," he noted. "The news media, they clearly wanted Biden to win. And there is so much discussion about the transparent voter fraud all over the country, that I think they felt that they had to move quickly before we go before the opponents began to gather steam. So, where we are right now, the news media has declared Biden the president. And we will we will just have to see in the coming weeks where that all leads."

"I think they are a little premature in what they're doing, but at the same time, their congratulations give some indication of the direction things are going," Black told Sputnik. "So it's hard to say, but of course, we have to recognize that Biden could end up being president."

The former state Senator also believes that the situation may still be reversed as there have been reports of incorrect computer results from ballot counting.

Trump has claimed that a massive fraud is taking place, affecting the outcome of the election after at least six Democrat-run US states halted counting votes on election night when the US president was leading in all of them. Trump said when the counting resumed, batches of ballots appeared in favor of Biden and then observers were not allowed to oversee the counting process, and there were other violations.

State officials have called Trump’s allegations unfounded, while some said they were looking into incidents which were not widespread.

Black told Sputnik that since it's been revealed that some vote counting computer results were incorrect, there will be pressure to hand count all of the ballots that these computers were tallying up.

"So there's still, there's a lot of uncertainty," Black concluded.

While Biden claimed victory in the 2020 presidential election on Saturday, Trump has argued that the race was not over yet. Trump's campaign has already filed a lawsuit on rejected votes in Arizona, particularly in Maricopa County.

Biden Likely to Be Less Hostile to Russia, China, Iran

"I would say the major possibility would be that Joe Biden might be looking for some sort of foreign policy successes and he could conceivably be less hostile towards Russia," Black told Sputnik.

The former lawmaker also said that he was optimistic that a Biden administration would not be as hostile to the Nuclear Non-proliferation Treaty (NPT) as the Trump administration was.

"I think Secretary Pompeo was extremely hostile towards international law and the treaties between the United States and the old Soviet Union," he said. "They were built over many years with enormous effort to try to diminish the threat of nuclear war. And unfortunately, we have dismantled many of those treaties. And so I would be hopeful, with Biden administration, that they would not have the same hostility toward the Nuclear Non-proliferation Treaty. And I would be hopeful that the new START treaty could succeed." 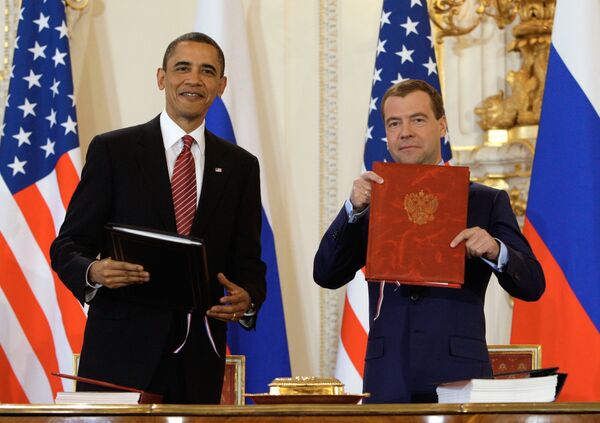 During the presidential campaign, Biden has committed to renewing the New START treaty, which is now the only remaining arms control pact between the US and Russia.

Black also said that he expects Biden to be less aggressive toward China.

"I think Joe Biden, his administration will be less hostile towards China," he stated. "Trump never intended to be hostile towards China, but he wanted a trade war, but not a, not so much a military confrontation, but he was sort of driven into that by both circumstances and by personnel. So I'm hoping that if Biden is the president, he will draw back from being so confrontational with China."

The relations between the United States and China have significantly deteriorated under the administration of US President Donald Trump after Washington accused Beijing of being engaged in unfair trade practices and of making timid efforts to contain the COVID-19 outbreak.

Tensions between the two countries have also soared over China's activity in the South China Sea. China has accused the US of trying to increase its presence in the South China Sea by sending navy ships to conduct freedom of navigation operations in the area. The US is also undermining peace and stability across the Taiwan Strait after a US warship crossed the waterway, China said. But despite Beijing's accusations, the US insists the strait is part of international waters and its "freedom of navigation" operations are in line with international law.

Recently, the US blacklisted 24 Chinese companies, saying that they are helping the ruling Chinese Communist Party construct artificial islands in the South China Sea, which the US sees as a military provocation.

Black also expressed hope for better relations between Iran and the United States under a Biden administration.

The former state senator believes that Biden would likely be less inclined to interfere with the European countries, which still recognize the Joint Comprehensive Plan of Action (JCPOA) and still try to abide by it.

"It's just that the United States has constantly interfered and prevented them from carrying out their obligations under the treaty that has kept them from doing so," he said. "So it's possible that even if Biden feels unable to reinstitute the JCPOA, he may simply quietly have the same effect by dropping his objections to the European countries carrying out their obligations under the treaty."

Black stressed that that would be a very positive thing for lowering tensions in the Middle East, as well as for restoring the economy of the Middle Eastern countries. "So that young men have an alternative to going to war. They can actually build things," he explained. "They can make things, they can do productive things. So I'm hoping that relations with Iran will improve."

Black also believes, however, that the problem for Biden may be the pressure that he gets from Republicans. "Joe Biden will not be able to do what he would like to do with their land, but I wouldn't be surprised if on the margins, even if he doesn't reconstitute the Iran nuclear deal," Black said. "He may sort of gently move a little bit more towards. In other words, he'll be less aggressive in opposing it." 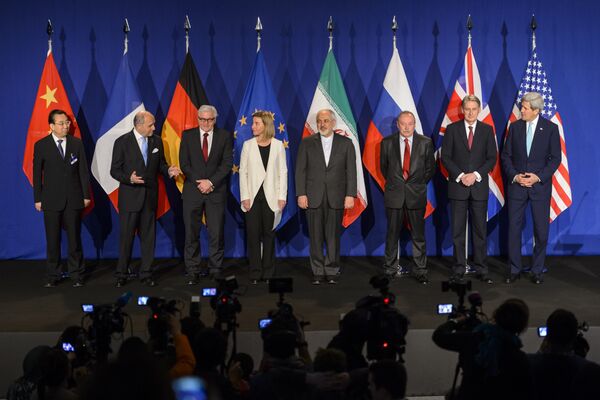 P5+1 and Iran representative pose prior to the announcement of an agreement on Iran nuclear talks on April 2, 2015
© AFP 2021 / FABRICE COFFRINI

In 2015, Iran signed the JCPOA with the United States, China, France, Germany, Russia, the United Kingdom, Germany and the European Union. It required Iran to scale back its nuclear program and severely downgrade its uranium reserves in exchange for sanctions relief, including lifting the arms embargo five years after the deal's adoption. In 2018, the US abandoned its conciliatory stance on Iran, withdrawing from the JCPOA and implementing hard-line policies against Tehran.

Spokesman for the Iranian government Ali Rabiei said in October that Tehran would welcome Washington’s return to the (JCPOA), also known as the Iranian nuclear deal, regardless of the outcome of the US presidential election.

Biden Might Be Willing to Bargain on Nord Stream 2

According to Richard Black, Joe Biden might be eager to bargain to some extent to allow the Nord Stream 2 gas pipeline project to be completed.

"It would be very nice to see the completion of the Nord Stream 2 pipeline that's almost finished. It should be finished in both Germany and Russia," Black said. "It's possible because Biden is not tied to the oil and gas industry in the United States. He might be willing to bargain a little bit on the Nord Stream project." 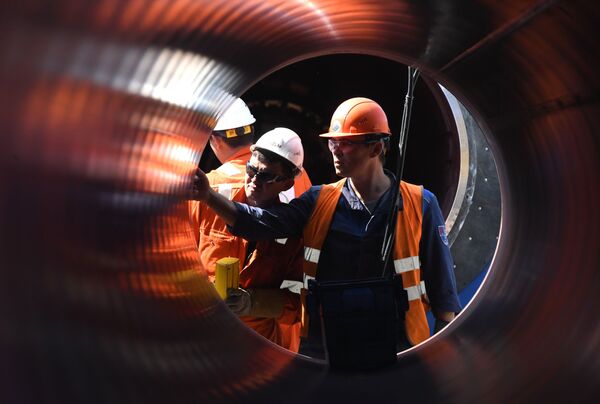 Employees work at the construction site of the Nord Stream 2 pipeline outside the town of Kingisepp, Leningrad region, Russia
© Sputnik / Ilya Pitalev
/
Go to the photo bank

Black believes that Biden might be offering to drop the objections to the project, and to drop the threat of sanctions.

"He would probably do it rather quietly, not to make a [a big deal] about it, but to just quietly arrange with Russia to let them go ahead and complete that section," he noted. "And then in exchange, he would be asking for some sort of advantages for the United States."

In October, the US State Department broadened the scope of its sanctions on the Nord Stream 2, enabling Washington to target companies that provide services or funding for vessels working on the pipeline project.

The Kremlin has criticized the United States for imposing yet another set of sanctions on the project, saying that it exemplifies Washington's desire for unfair competition.

Despite the US sanctions, German Chancellor Angela Merkel said this past January that the Nord Stream 2 pipeline, which will deliver Russian gas to Europe, should be completed.

Earlier, US sanctions on the project resulted in Switzerland's Allseas, which was participating in laying the pipeline in the Baltic Sea, suspending its work in late December.

000000
Popular comments
Trump has caused a huge economic losses to the US. Trade wars against China and the EU, pushing Arabs to be friends with their archenemy Israel that is not a business for the US, etc. The debt is the highest in the US history and the poor Americans that can't afford to go to college or uni and can't afford to have a medical insurance will have to pay for it. I wonder why they can't see that people like Bezos double their wealth every year while they have less and less left. Amazon had a $3bn profit in 2016 that went up to $10bn in 2018 despite increase in sales throughout all departments only between 10 to 20%. There is no way to treble the profit with 20% increase in business if you pay your fair share of taxes as the mathematics doesn't support it