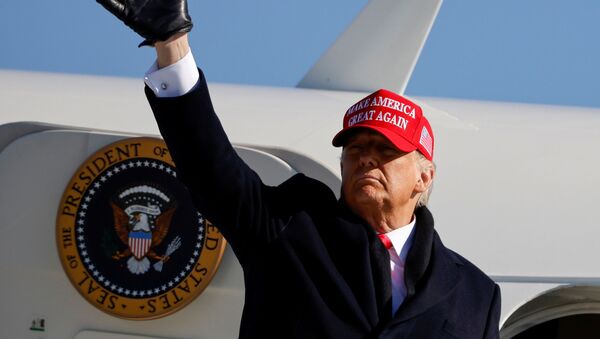 Ekaterina Blinova
All materialsWrite to the author
Although Joe Biden appears to be closing in on victory, the Trump campaign insists that the 2020 election was "stolen" from them citing alleged fraud and irregularities. Wall Street analyst Charles Ortel has explained how US voter trust in election integrity can be restored.

"The first objective now is to ensure that all votes lawfully cast are reliably counted", says Wall Street analyst and investigative journalist Charles Ortel. "This means that each in person vote and each vote post marked by or on Election Day is tabulated accurately. It is [also] necessary to ensure that each voter only got one vote".

Discussing the allegations circulating on social media, the analyst notes that some suggest ballots cast for Trump may have been destroyed by partisan poll operatives, while others say that large numbers of ballots for Biden may have mysteriously arrived after Election Day.

"Americans have long lost faith in politicians and in election vote counting", Ortel notes. "This is seen in relatively low voting turnout comparisons with other nations".

Something is definitely off.

​The only way to restore the trust of US voters and dispel any doubts is to compare down ballot vote results in key states with estimated counts for Trump versus Biden in 2020, according to the investigative journalist.

Meanwhile, on Friday, NPR reported that Georgia would conduct a recount given the razor-thin margin between the two presidential contenders, citing Secretary of State Brad Raffensperger. The same day CBS News' Catherine Herridge quoted Georgia election officials as saying there are still up to 8,410 military and overseas ballots that have yet to be counted.

#ElectionResults2020 Georgia: Election officials say there are still up to 8,410 military + overseas ballots that could be counted if they arrive on time Friday. Less than 2-thousand votes separate former VP Biden + POTUS WATCH: @CBSNews pic.twitter.com/dcNUPJ0P1G

​Adding to the ongoing controversy, Michigan's Antrim County admitted an apparent "software glitch" that incorrectly directed thousands of votes for Donald Trump to his Democratic contender. After it was fixed the county flipped to the incumbent president, while the whole state remained in Biden's column.

Right now we don't have faith in the system that Jocelyn Benson and Gretchen Whitmer have set up for Michigan.

Democrats should not be okay with ballots being backdated against election law. pic.twitter.com/Ta5APkL1zd

​Concurrently, Judge P. Kevin Brobson of the Commonwealth Court of Pennsylvania issued a statewide order to segregate certain provisional ballots "so they can be lawfully reviewed to ensure that this election was properly managed". A day earlier, the court obliged Pennsylvania election officials to set aside any mail-in ballots that arrived after Election Day and before the Friday deadline. However, James O'Keefe from the right-leaning activist group Project Veritas has added fuel to the fire by citing an alleged "US Postal Service whistleblower" who claimed that most of the ballots that arrived on 4 November were supposedly backdated to 3 November.

Trump's Legacy Will Prop Up Conservatives Even if He Loses

While the Trump campaign is continuing its legal battles in the major swing states, the contesting sides have a limited time to settle their differences as the head of the US government should occupy the Oval Office by 20 January 2021.

"Courts will move quickly during a period by which the Electoral College must meet and attempt a vote", Charles Ortel asserts. "If the Electoral College cannot reach a decision concerning the voting results, then the process moves to the legislative branch. As a guess, resolving who actually won will take many weeks, but we will certainly have answers before 20 January 2020".

Ortel rules out any compromises between Trump and the Democratic Party suggesting that they will fight to the bitter end.

"President Trump must raise his game and demand that key appointees follow the Constitution and all applicable laws", he says. "We voted in 2020 without unscrambling how elections in 2016 and 2018 may have been rigged against Trump. The president has solemn duties to defend the Constitution against 'all enemies, foreign and domestic'".

However, even if Biden wins, Trump may give the Democrats a dose of their own medicine and appoint a special prosecutor to investigate the recent allegations over the materials supposedly found on Hunter Biden's laptop, according to the Wall Street analyst.

"This prosecution may dog [Biden's] tenure as president", he suggests, recollecting that the Democratic Party has repeatedly tried to disrupt Donald Trump's presidency with the "Russiagate" and "Ukrainegate" narratives.

On the other hand, the projected balance of forces in the House and the Senate may reduce the Democratic Party's influence in the US Congress and potentially undermine Biden's leftist political and economic initiatives, the analyst suggests.

In addition to this, Trump has already "improved the judicial branch through his appointment of conservative constitutionalists", Ortel underscores.

The US will remain "a large economy and powerful player on the world stage", regardless of who occupies the White House on 20 January 2021, the analyst concludes, expressing hope that Trump will come out on top after all the 2020 election disputes are settled in court.