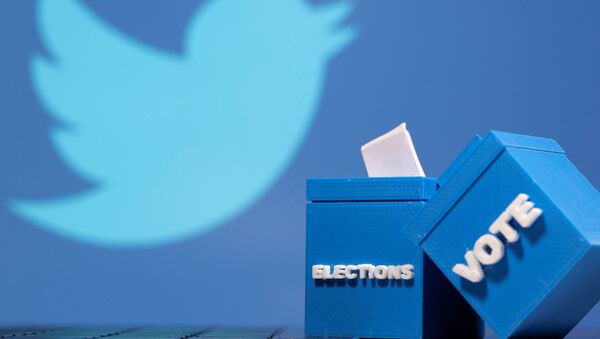 Daria Bedenko
All materialsWrite to the author
As the votes in the US presidential election continue to be counted, Twitter has been consistent in censoring some of President Donald Trump's tweets claiming victory or alleging election fraud, labelling them as "disputed" or "misinformation".

The US presidential election has left many Americans biting their nails in anticipation of the results, with both campaigns taking to social media to share their thoughts and expectations - sometimes in a manner seen by Twitter as disputable.

While it was mainly tweets from the Trump campaign that received Twitter labels, the platform later expanded its flagging to include members of the Democratic Party who called Biden "president-elect" in their messages.

Since no one has officially been declared the winner of the 2020 election yet, Twitter tagged several posts by Democrats with the comment: "Official sources may not have called the race when this was tweeted". Among those receiving the label were Andrew Yang, Scott Dworkin, and Anthony Scaramucci.

​Earlier on Friday, Nancy Pelosi referred to Biden as "president-elect" when speaking to reporters at the US Capitol in Washington, although votes in several key states remain to be counted.

Trump, who received several labels for his tweets where he, contrary to the media, claimed victory in a couple of key states, stressed Friday that Biden "should not wrongfully claim office of the president".

"Joe Biden should not wrongfully claim the office of the president. I could make that claim also. Legal proceedings are just now beginning!", POTUS tweeted.

Twitter expanded its supervision to the Democrats after the platform was condemned for going into censorship mode when it came to the members of the Republican Party and the Trump campaign.

Since the beginning of the week, more than a dozen tweets by Trump demanding that the vote count be stopped or alleging election fraud have received tags, saying the content was disputed or misleading.