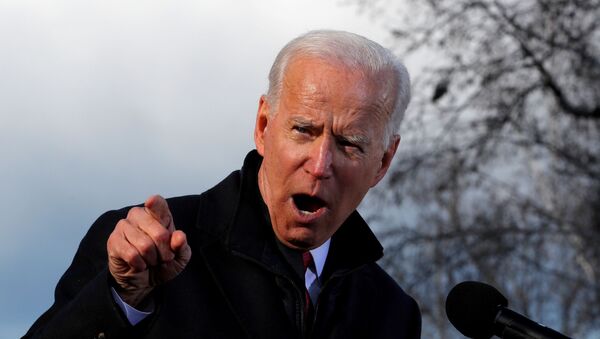 Tim Korso
All materialsWrite to the author
In an election impacted by the ongoing coronavirus pandemic and record-breaking levels of mail-in voting, the tight race for the White House between incumbent Republican President Donald Trump and his Democratic opponent Joe Biden seems to have reached its climax with the arrival of the voting data from Pennsylvania.

Joe Biden has gathered enough votes to win the state of Pennsylvania, according to AP’s call. In light of the Democratic candidate's projected success in Pennsylvania, the AP has called Biden the winner in the 2020 US presidential election, as with this state he passes the 270 Electoral College votes required to win the presidency.

Biden was quick to react to the news, rushing to thank the country for "choosing" him as the next US president and promising not only to be president for those who voted for him, but also for those who did not.

His Republican opponent, Donald Trump, has not conceded to Biden, instead arguing that the election is far from over. POTUS has accused the Democrat and "his media allies" of rushing to "falsely pose as the winner" in an attempt to conceal the truth, presumably referring to his accusations of voter fraud and the counting of illegal votes that came in after the polls had closed. He added that his campaign will start prosecuting the case in court starting on Monday in a bid to ensure that "election laws are fully upheld and the rightful winner is seated".

"The simple fact is this election is far from over. Joe Biden has not been certified as the winner of any states, let alone any of the highly contested states headed for mandatory recounts, or states where our campaign has valid and legitimate legal challenges that could determine the ultimate victor", Trump said.

The AP call came as Trump was trailing Biden in Pennsylvania with 49.1% against 49.6% with 96% of the estimated ballots counted, according to the latest Edison Research report. Authorities in Pennsylvania are yet to officially announce the results of the tally, with several other states still counting votes.

The counting continues in Georgia, where Joe Biden recently took the lead over Trump after days of trailing behind. In Arizona, in turn, Trump has narrowed his margin against Biden to 0.6%, coming closer to turning the state red as 97% of the votes have been counted there so far, according to Edison Research. Nevada is another state where Trump trails slightly behind the Democrat with 47.9% versus 49.9% and with 6% of the ballots yet to be counted.

What Was the Situation in the Run-up to Election Day?

As Donald Trump and Joe Biden headed into Election Day on 3 November, pollsters had suggested the president’s Democratic opponent was registering a more comfortable lead than Hillary Clinton had four years ago against Trump. In 2016 Donald Trump had swept in to claim a stunning victory in the electoral college vote against his opponent.

The final polls before the 2020 election, released on 2 November, showed that while some states were close, Biden was ahead in enough swing states to potentially win. 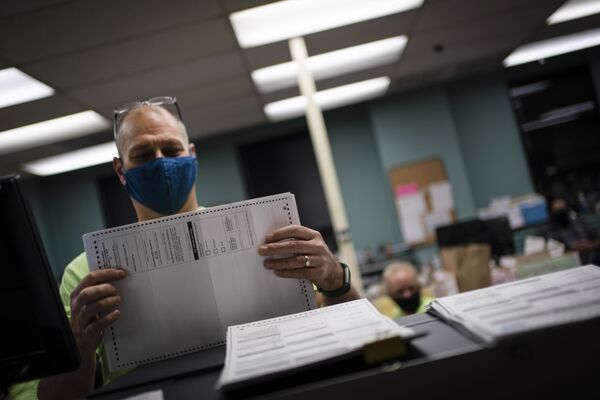 The current presidential race in America stood apart as one that unfolded against the backdrop of the coronavirus pandemic that triggered, in part, a record-breaking surge of mail-in and early in-person voting.

Over 98 million Americans had already cast their votes in the 2020 presidential election by the time President Donald Trump and his rival Joe Biden delivered their closing pitches to voters.

Election experts had warned that the night might be marred by irregularities due to a spate of factors, such as delays in ballot counting due to the pandemic. 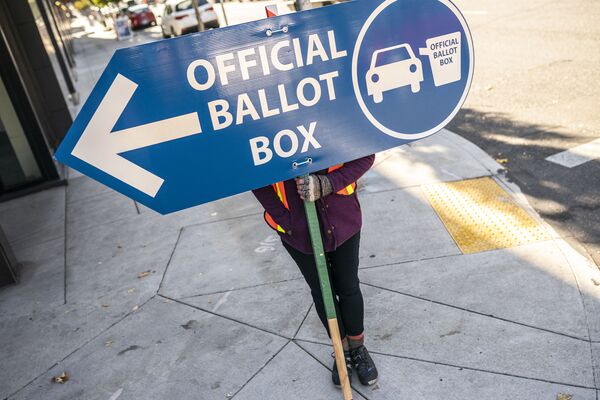 An election worker directs voters to a ballot drop off location on November 2, 2020 in Portland, Oregon. Oregons voting system allows for ballot processing before the start of Election Day.
© AFP 2022 / Nathan Howard

Both official US election officials and the media had cautioned against expecting the swift announcement of a winner by the end of election night.

There are 538 Electoral College votes allotted to the 50 states and the District of Columbia.

Trump and Biden were tussling for the 270 voted it takes to win, as electors are representatives of their party in a state who pledge to vote for a specific candidate.

Speaking on Tuesday as poling started across the country, Joe Biden claimed he felt victorious, saying:

"We feel good about where we are, we really do. I am here to tell you tonight we believe we're on track to win this election."

The Democratic contender then headed back to Delaware to watch the returns at home with his family.

The Democratic presidential contender’s campaign manager added that if they could hold Minnesota, Nevada, Colorado, and Virginia, the so-called “protect states”, the party may be able to win the election without securing a victory in battleground states such as Florida, Pennsylvania, Ohio and Texas.

O'Malley Dillon added that data from early voting had the Democrats ahead in several battleground states.

After the AP called the election for Virginia and Vermont, with Joe Biden winning the vote count in the states, the Democratic candidate had proceeded to sweep Colorado, the District of Columbia and New Hampshire, followed up by triumphs in California, Oregon and Washington. 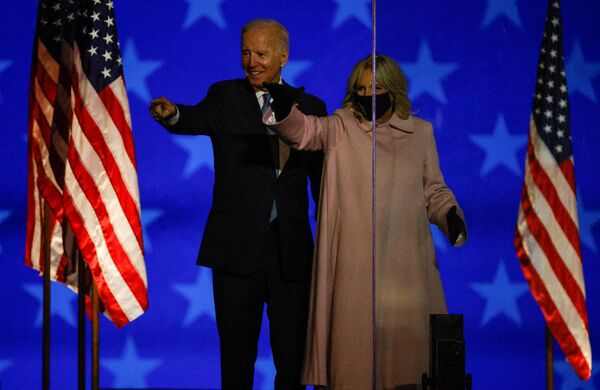 By early Wednesday Joe Biden had won 21 states, with 238 electoral votes out of the 270 required for victory, while Donald Trump had come out triumphant in 23 states, with a tally of 213 electoral college votes. 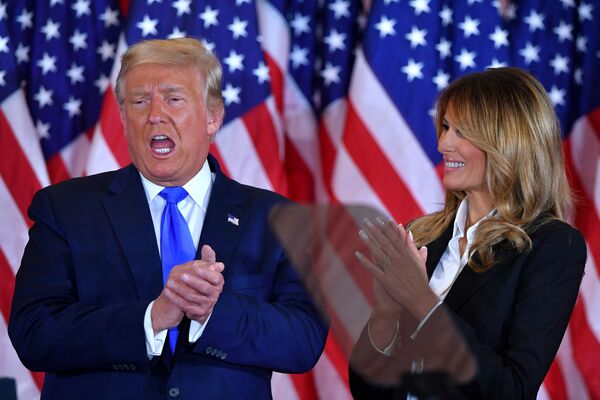 US President Donald Trump claps alongside US First Lady Melania Trump after speaking during election night in the East Room of the White House in Washington, DC, early on November 4, 2020.
© AFP 2022 / Mandel Ngan

"Keep the faith, guys. We are going to win this."

Trump’s Democratic challenger warned that it may take longer than anticipated for the outcome of the election to transpire.

As the first polling stations opened, kicking off the in-person voting in the country, US President Donald Trump on Tuesday said he felt “very good” about his chances of winning, hoping to register big wins in key states such as Florida and Arizona.

“We feel very good. We have crowds that nobody's ever had before, it's insane and I think you can agree. It's been incredible. The crowds have been incredible,” Trump told Fox News in an interview on Tuesday morning.

After midnight, Trump and Biden were neck-and-neck with 49.5 percent in the battleground state of Florida, according to preliminary tallies. The state went to Trump with 51 percent of the vote as compared with Biden’s 48 percent.

Finally, AP called the election for South Carolina, West Virginia and Kentucky, with Trump claiming victory in these states. 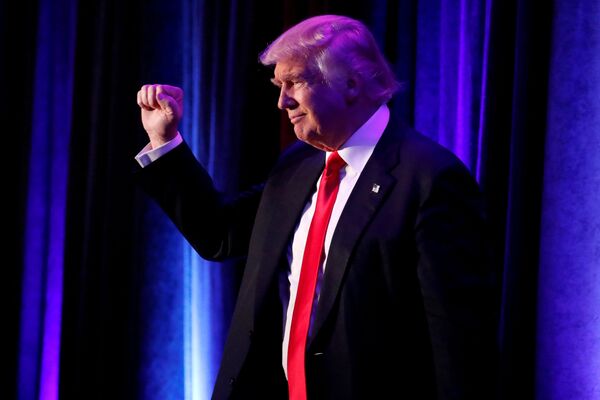 In an appearance after the voting, Trump touted his great performance.

"We didn't win it, we won it by a lot," Trump said at the White House.

The president also alluded to his opponents plotting "a major fraud on our nation" and vowed he would launch a legal battle in the Supreme Court to ensure the integrity of the election, as he sought to prevent any ballots from arriving once polling stations had closed.

​Trump called it “terrible” and “dangerous” that millions of votes mailed in might still not be counted on Wednesday, yet downplayed allegations that he planned to prematurely declare victory Tuesday evening before enough of the vote is tallied to determine the winner.

By early morning Wednesday Donald Trump had come out triumphant in 23 states, with a tally of 213 electoral college votes, while his rival Joe Biden had won 21 states, with 238 electoral votes out of the 270 required for victory.

Besides predictable wins in their respective parties' strongholds, like Tennessee and Alabama for Trump’s Republicans, and California and New York for the Democrats, each had also secured prized contested assets. Trump claimed the coveted states of Texas, Florida and Ohio, while Joe Biden surprisingly won in Arizona.

Pennsylvania, Michigan and Wisconsin, together worth 46 electoral votes, seemed to be instrumental in the looming showdown.

Pundits had earlier warned that Americans would not know the winner of the 2020 US presidential election until well into Wednesday, or even later, citing the fallout from the COVID-19 pandemic and restrictions set in place to try and curb its spread. Under the circumstances, many states had opted to make it easier to request a mail-in ballot.

Driven by concerns for their health at crowded polling stations, many voters chose to vote by mail, however, counting mail ballots is generally a much more time-consuming process.

Furthermore, some states were set to count votes that hadn’t even arrived on election night because they were still in the mail.

Pennsylvania, for example, expected up to three million mail-in ballots, allowing them to be received within three days of polls closing, with local officials suggesting the count might last until Friday.

Michigan, Wisconsin and Georgia results had also kept up the suspense, with North Carolina counting mailed ballots until 12 November.