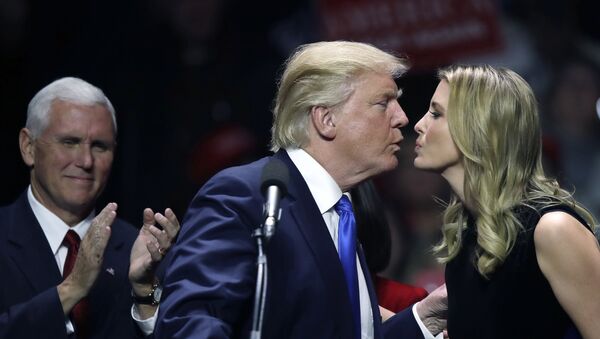 Aleksandra Serebriakova
Moscow-based Sputnik correspondent specializing in foreign affairs.
All materialsWrite to the author
A number of key swing states in the US still have not announced final results following the presidential election. In some battleground states, the vote difference between incumbent President Trump and Democratic challenger Biden is less than 1%.

Jimmy Kimmel, who hosts a US late night show, joked onTwitter that the presidential race between Joe Biden and Donald Trump is now “closer than Donald and Ivanka at a father daughter dance”.

The president’s “intimate” relationship with his eldest daughter are a common point of ridicule in America, as once Trump said that he would be “dating” Ivanka if she was not his daughter.

Many however reacted to the tweet with a flow of memes suggesting that the host’s comment was too gross to bear.

Kimmel made it pretty clear during a Wednesday episode of his late-night show that he is really not a fan of Donald Trump, listing the president’s alleged failures in the post. The TV host noted that he was “shocked” by the amount of support Trump received from the US public after four years in the office, saying that he actually “overestimated the American people”.

“He Kowtowed to Vladimir Putin. He cozied up to Kim Jong Un. He alienated us from our allies. He put children in cages. He villainized the press, hid his tax returns. He tear-gassed peaceful protestors. He pardoned his criminal buddies. He extorted Ukraine. He misled us about COVID. He dismantled the Pandemic Response Team. He dismantled healthcare,” the comedian went on.

He also defined the 24 hours following the election as a “roller coaster of emotions and nausea”.

Meanwhile, Donald Trump has now secured more than 69 million votes across the country, the largest volume of support any Republican presidential candidate had ever gotten in the history of the United States. He is still estimated to be behind his Democratic opponent, both in the popular vote and in Electoral College count, as Joe Biden has so far received around 73 million votes, the most support any presidential candidate has ever received.

However, the results of the presidential race are still far from clear, as Donald Trump announced on Thursday that every vote that came in after the Election Day should not be counted, citing potential fraud.