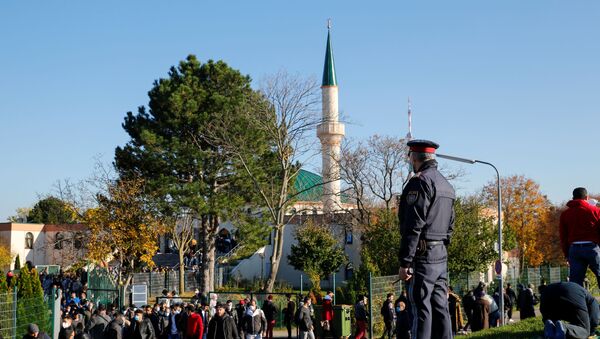 © REUTERS / LEONHARD FOEGER
Subscribe
VIENNA (Sputnik) - The closure of radical mosques after the Vienna attack is not an attack on religion, but a fight against extremism, Austrian Integration Minister Susanne Raab said on Friday.

Earlier in the day, Austrian Interior Minister Karl Nehammer and Integration Minister Susanne Raab stated as quoted by APA news agency that all the so-called radical mosques across the country would be closed in the wake of the recent deadly terrorist attacks in Vienna.

According to the news agency, the decision was made following a meeting with the head of the Islamic religious community in Austria, Umit Vural. In particular, these mosques will be deprived of legal status and dissolved.

International Community Shocked After Vienna Terror Attack, Express Condolences to Austria
On Monday evening, a series of gunfire attacks took place in the centre of Vienna, one of the targets was a synagogue. According to the Austrian authorities, this was a terrorist attack. One assailant was killed and the police are looking for possible accomplices.

As a result of the attack, five people were killed, including the terrorist himself, who, according to the Austrian Interior Ministry, was a supporter of Daesh*.

*Daesh [ISIS, ISIL, the Islamic State] - a terrorist group banned in Russia and many other countries