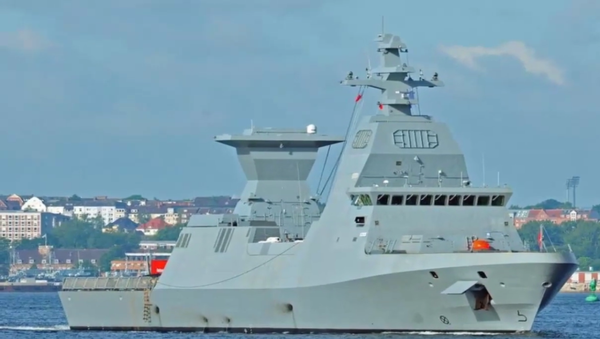 © Sputnik Screenshot
Subscribe
International
India
Africa
Morgan Artyukhina
All materialsWrite to the author
The Israel Defense Forces (IDF) will receive the first of its new Sa’ar 6-class corvettes at a ceremony next week from Germany, where the ships are being made. The warship will sport a range of missile interceptors and powerful radar to protect Israel’s sprawling offshore gas fields.

According to a report by the Times of Israel, a ceremonial changing of the ship’s flag from German to Israeli will take place on November 11, and the vessel will be named the INS Magen - the first of four warships in the new class.

Weighing in at roughly 2,000 tons, the Sa’ar 6 is loosely based on Germany’s Braunschweig-class ships, also built by German producer ThyssenKrupp. However, it has been significantly modified to accommodate Israeli needs, such as the Iron Dome and David’s Sling air defense systems as well as the Barak-8 ballistic missile interceptor system.

Defense News reported demand for the ships was sparked by fears that Hezbollah, Hamas or even Iran could target Israel’s offshore gas infrastructure with missiles, especially since Israel is heavily dependent on natural gas for electricity.

The ship also has a stealthy radar cross-section, making it smaller on enemy radars. The INS Magen is expected to be followed by the INS Oz, INS Atzma’ut and INS Nitzahon within the next year.

The deal for ThyssenKrupp to build the Sa’ar 6-class ships is also part of the graft investigation into several leading Israeli businessmen, including several associates of Israeli Prime Minister Benjamin Netanyahu and former Israeli Navy commander Eli Marom. Prosecutors have alleged the officials accepted massive bribes from ThyssenKrupp in exchange for signing a much bigger contract for the ships.