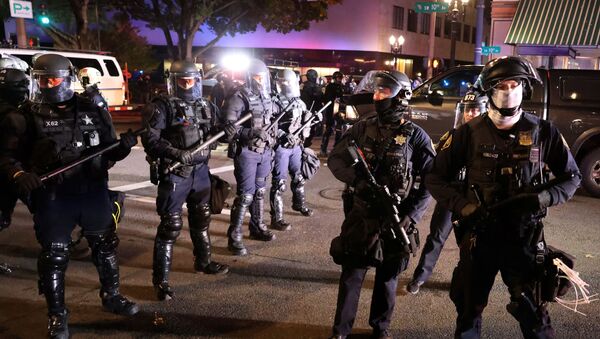 WASHINGTON (Sputnik) - Former Green Party vice presidential candidate and the national organizer of the Black Alliance for Peace Ajamu Baraka said that he does not foresee widespread post-election violence in the United States but is not ruling out flare-ups, especially in the battleground states of Michigan and Pennsylvania.

US election results are still being tabulated in several key battleground states, including Michigan and Pennsylvania, meaning that country’s choice for the next Commander-in-Chief still hangs in the balance.

"I think there is going to be some disruption. I think we see the beginning of some signs of it in some of the places where they've been counting the votes. I don't anticipate a lot of that. I think the potential for violence was greatly exaggerated," Baraka, a veteran human rights activist, said.

Baraka explained that ensuring law and order is well within the capacity of the US system of governance, adding that perpetuated fears of street battles or a coup attempt by incumbent US President Donald Trump were "ridiculous."

Nevertheless, the former vice-presidential candidate is not ruling out potential hotspots in contested US states, including Michigan and Pennsylvania, which are key to the fortunes of both Trump and his Democratic challenger, former Vice President Joe Biden.

"I think Pennsylvania and Michigan could be potential hotspots, but it remains to be seen … those are the places where you have the most controversy," national organizer of the Black Alliance for Peace said.

Biden currently holds an advantage over Trump in both the popular vote and electoral college count, according to Fox News. Furthermore, Biden is ahead in the state of Nevada, whose six electoral votes would carry him to the 270-electoral vote threshold required to win the presidency.

Both the Trump and Biden campaigns have said in course of the day that they are confident their candidate will emerge victorious once the results are finalised.