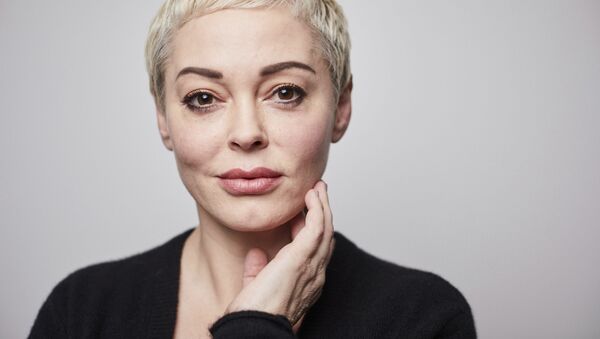 Irina Acheeva
correspondent
All materialsWrite to the author
Tensions in the US remain high as incumbent president Donal Trump and Democratic rival Joe Biden remain neck and neck in the high-stakes presidential election.

Charmed star Rose McGowan, an activist and one of the most prominent figures of the #MeToo movement, has apparently sustained an injury while "reading the US election results", as her post on Instagram claims.

"Reading US election results while on the stairs = bone break", she captioned the photo.

​The latecomer to the beloved hit show Charmed, McGowan, 47, has also explained that she is currently in Mexico, saying that "it cost $250 in Mexico for my emergency room visit, compared to a likely 10k hospital bill in California for the same accident".

Reading US election results while on the stairs = bone break. It cost $250 in Mexico for my emergency room visit, compared to a likely 10k hospital bill in California for the same accident. USA is not the land of the free, it’s the land of the overcharged. #bigpharma #usa🇺🇸 #mexico 🇲🇽 OUCH

Netizens have expressed their support for the actress, wishing her a speedy recovery. Some of the social media users have started discussing how hospitalisation prices differ in various countries.

"In Denmark we pay it over the taxes.. so last year when I broke my wrist it was a free visit to the hospital... get well soon," one commentator wrote on Instagram.

"In France with the "social security" and mutual all hospitalization it's free and medicine are free too with that," another one added.

​Fans from Germany and the UK also noted that "health is not a business" and it should be free.

The Charmed fans have made jokes about the situation, reminding the actress she is a "white lighter", a character from the TV series who could heal herself or other people.

As the election votes count started on 4 November, she expressed solidarity to supporters of both presidential candidates Donald Trump and Joe Biden and encouraged people to "go with the game-changers".

McGowan has previously openly criticised both Trump and Biden.

In August, she blasted Joe Biden and the Democratic Party in a series of tweets, claiming they all are "frauds".

"You are the season of darkness. @JoeBiden @dnc You are monsters. You are frauds. You are the lie", she wrote on Twitter, supporting Biden assault accuser Tara Reade.

In 2016, the actress took aim at Trump and accused him of "causing a worldwide sickness" in an open letter.

"You are causing a worldwide sickness. You are POISONING us as sure as Flint is poisoning its citizens. You are poisoning your very own family and us, your brothers and sisters," she wrote.

​The actress reportedly relocated to Mexico in July.

The US presidential election has turned into a nailbiter as incumbent President Donald Trump and Democratic contender Joe Biden are virtually neck and neck in several key swing states. As Biden has 264 electoral college votes, claiming victory only one of the still-contested states is needed for him to gain the required 270 electoral votes. Meanwhile, Trump would need to achieve success in North Carolina, Georgia and Pennsylvania to secure 271.

As the count of the votes continues, Trump blamed pollsters for meddling in the election process and accused the Democrats of engaging in fraud.