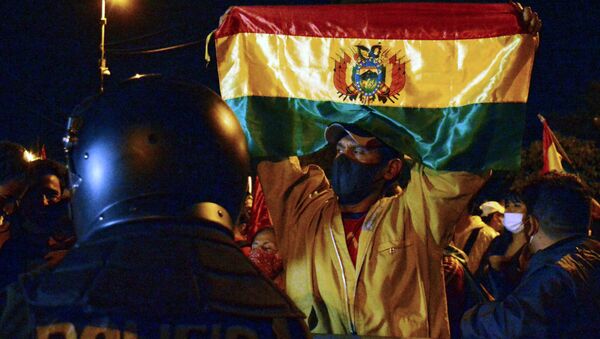 MOSCOW (Sputnik) - A group of people has attacked the Bolivian Movement for Socialism party (MAS) headquarters while President-elect Luis Arce was having a meeting there, MAS spokesman Sebastian Michel said.

"A few minutes ago we were victims of an attack by a group that left a dynamite checker at the headquarters where our elected President Luis Arce was holding a meeting," Michel told Television Universitaria and Red Uno on Thursday.

According to Michel, nobody was hurt in the incident. The spokesman expressed regret that none of the officials responsible for the state's security commented on the incident.

The police are investigating the incident to locate those responsible.

On his Twitter account, Former Bolivian President Evo Morales condemned the attack against Arce, saying that small groups tried to generate violence and confusion but the party would not fall for any provocation.

On 18 October, Bolivia held presidential elections where Arce won 55.1% of votes. The elections were held early after the cancellation of the voting results on 20 October 2019, where then-leader Evo Morales claimed victory. His main opponent Carlos Mesa did not recognize the results and Bolivia suffered a series of opposition protests. After three weeks of demonstrations, Morales resigned and fled the country.