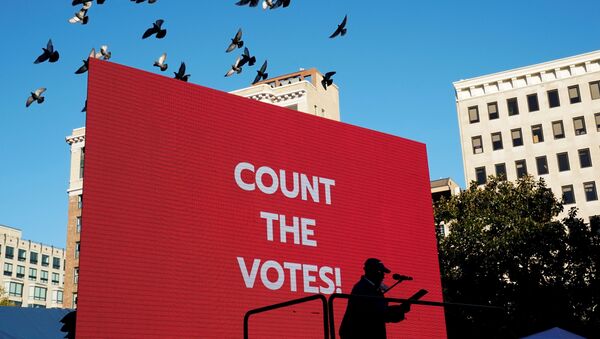 WASHINGTON (Sputnik) - The 2020 US presidential campaign was marked by severe censorship by social media platforms, and the media kept people in the dark on the scandal around Joe Biden’s son so that they could not accurately evaluate the candidate, former Virginia State Senator Richard Black said.

"There was a tremendous amount of censorship on Twitter, Facebook and YouTube. And there was an enormous scandal with Hunter Biden. Hunter Biden went to Ukraine and he was on the board of directors at Burisma, which is a big gas production company there. And Burisma has a very poor reputation for following the law in Ukraine," Black said.

Hunter Biden was a board member at Ukrainian energy company Burisma. Ukraine’s former prosecutor, General Viktor Shokin, led an investigation into the firm, but the probe was subsequently closed and Shokin was dismissed. According to media reports, Shokin said the investigation had been ended out of fear of the United States.

"And so the Ukrainians fired the prosecutor and that shielded Burisma from the rest from the investigation and of course, Vice President Biden's son from being investigated. So all of these things were blocked by the media. They wouldn't allow people to understand what was going on. So they didn't know much about Biden. And they just kept everyone in the dark so that nobody could evaluate the candidate," he said.

On the campaign trail, Biden denied allegations that he was involved in his son’s business deals.

Dozens of Lawsuits Likely to Be Filed Over US Election Results

Dozens of lawsuits will likely be filed over the 2020 US presidential election results and most likely will end up in the Supreme Court, former Virginia State Senator said.

Black explained that they may just not be in a position in which they can overrule the ballots because they don't like the rules.

"President Trump was deeply concerned about mail-in balloting. I think all of the Republican Party were. They knew that this was likely to result in massive fraud. And I think it has. And I'm not sure that Supreme Court will be able to correct the problem at this point... I'm afraid it might be too late to correct it. I can't believe for sure, but it is a problem for President Trump at this point," he said.

In the late hours of Tuesday, Trump declared that he had won re-election, adding that this year's vote was a fraud. The president said he would ask the Supreme Court to ensure the integrity of the election and prevent any ballots from coming in after polling places are closed.

CNN reported citing two anonymous sources on Wednesday that Trump’s campaign was considering taking legal action in Arizona and Nevada as votes were still being counted.

"What has happened is, I think, that President Trump had actually won the elections, but because the Democrats have put in place very unusual mail-in ballot rules because of the COVID situation, that what’s happened is there's very little internal control over who is voting, who is casting the votes, who's counting the ballots," Black said commenting on the preliminary data released officially.

Black continued to say that in different states, it started with a good lead for President Trump, but as they receive the mail-in ballots, it becomes enough to make Biden win in that particular state.

"The United States has a colorful history of voter fraud," Black said. "Back in the 1960 presidential elections, Richard Nixon had won the election against John F. Kennedy. Most historians, I think, recognize this. And the Kennedy campaign called the Mayor of Chicago, [Richard] Daley, and they said we're short on votes and how many do you need? And then he went out and got them and that's what put Kennedy over the top. So this is not new for us, but it's more massive. The fraud is more massive than it has ever been before," he said.

Black concluded to say that it leaves some uncertainty about who will ultimately be seated as president.

Lockdown, Fear of Violence Define Voters’ Choice in US Election

The issues related to the lockdown, law and order, as well as street violence, were among defining voters’ choice in the US presidential election, Richard Black said.

"First of all, I think, the lockdown, and the lockdown crushing the economy, what was a booming economy. That was the number one thing because President Trump had achieved the lowest black unemployment in history, the lowest Hispanic and extremely low white unemployment," Black said when asked about the main factors that defined the choice of the voters.

The former lawmaker believes that law and order were also very important to the voters.

Speaking about Donald Trump, Black noted that there is some frustration among some people about his style.

"They don't like the constant level of friction. He's very combative with his enemies. And there are some people who would prefer to not have to worry so much about what's going on and not to hear about it and so I think to some extent that that takes some votes away from President Trump," he said.

With regards to Joe Biden, Black noted the matter with fracking in Pennsylvania.

"He went back and forth about whether he would allow for fracking. Then he started talking about the new green deal and how he would stop the use of all fossil fuels in Pennsylvania - produce coal, oil and natural gas - all of those fossil fuels very important to Pennsylvania. So, I think he hurt himself there," he said.

Democratic presidential nominee Joe Biden has so far has secured 264 electoral votes, while incumbent President Donald Trump has just 214, as Fox News has projected based on official results. The tally leaves Biden one state away from winning the presidency as of late on Wednesday night. The be declared the winner, 270 electoral votes are required.