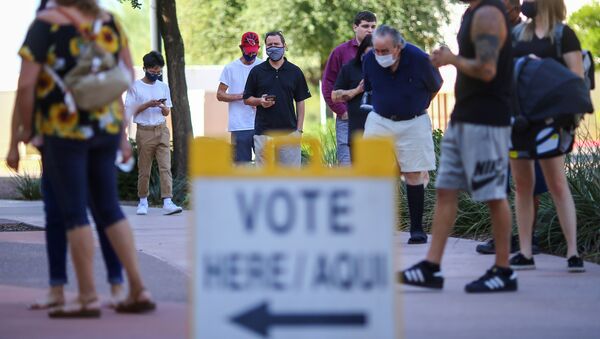 © REUTERS / EDGARD GARRIDO
Subscribe
Daria Bedenko
All materialsWrite to the author
The Trump campaign has denounced the counting of votes in the presidential election, claiming "massive cheating", and has initiated lawsuits to stop ballot counts in Michigan and Pennsylvania.

A Trump campaign senior advisor, Jason Miller, asserted that Donald Trump would win Arizona, citing over a half million uncounted early ballots in the state. He urged The Associated Press and Fox News to retract their election calls that predict a Biden win in Arizona.

In a Wednesday tweet, Miller claimed that "this is big", referring to reports suggesting that Adrian Fontes, a recorder for Arizona's Maricopa County, said that there were some 180,000 early ballots returned in the county. According to Miller, referring to overall numbers, Arizona has over 600,000 ballots yet to be counted.

🚨This is big. @FoxNews and @AP should immediately retract their call in AZ. @realDonaldTrump is going to win the state.🚨 https://t.co/kBII2i5MQy

Miller's prediction would become reality if Trump pulled off 57.73% of the remaining vote, according to reports.

The call by the Associated Press - one of those Miller that urged to retract - suggested Arizona had turned blue, securing 11 electoral votes for Joe Biden, despite that, historically, The Grand Canyon State has often been a GOP stronghold.

The Trump advisor's comments come as the president's campaign is insisting that all votes cast after polls stations close must not be counted, and accusing the Democrats of rigging the election. Trump tweeted what he referred to as "surprise ballot dumps" and said that his loss in several key states was "very strange".

On Wednesday, the Trump campaign announced that it would file lawsuits in Pennsylvania and Michigan, demanding the ballots stop being counted because Republican observers do not have access to the vote counting locations.

In the Pennsylvania lawsuit, the campaign also claimed that the Pennsylvania Supreme Court engaged in what is described as an "unlawful extension of the mail-in ballot receipt deadline", calling it a change of time, place and manner of the election - something that can only be done by the United States Congress or a state legislature, constitutionally.

A POTUS personal lawyer, Rudi Giuliani, hinted that the GOP campaign could roll out a national lawsuit to stop vote counting in Pennsylvania, claiming that "not a single Republican has been able to look at these ballots".

The Trump team has also demanded to recount votes in Wisconsin after what they claim are "reports of irregularities in several Wisconsin counties which raise serious doubts about the validity of the results", according to remarks from Trump campaign manager Bill Stepien.

Already heated enough, tensions in the White House race are fueled by debate over mail ballots. Trump, who has opposed vote-by-mail, claimed that it could potentially lead to election fraud and vote count troubles.

Regarding Arizona results, observers of The NYT spotted an error in the Edison Research data feed, noting a "glitch" in Biden's favour claiming that 98 per cent of the ballots had been counted - with the real figures of 86 per cent.

According to multiple reports, the presidential election's mail in votes faced several difficulties and problems, with some ballots cast by those who are dead in New York or failing to arrive to voters in Pennsylvania.