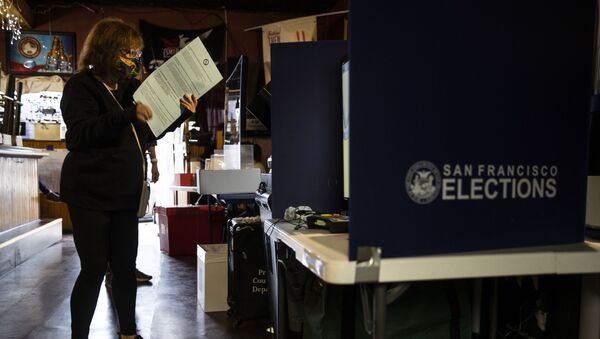 © AFP 2021 / Stephen Lam
Subscribe
Svetlana Ekimenko
All materialsWrite to the author
As the vote count continues in the 2020 US presidential elections, the process has been significantly slowed down this year by a record-breaking number of ballots having been cast by mail – something Republican President Donald Trump has long been railing against as fraught with the potential for fraud.

Amid the ongoing vote count in the US presidential elections, where Donald Trump and his Democrat opponent have yet to gather the required 270 electoral college votes to obtain victory, state officials have vowed they would not be intimidated by the possibility of armed federal agents showing up at ballot-counting sites.

The tabulation of votes from some states is still in process, as the current elections have gone on record for their massive surge in mail-in votes – something applauded by the Democrats amid the coronavirus pandemic and repeatedly slammed by the Republican President as fraught with the potential for disaster and vote-rigging.

In response, Pennsylvania's attorney-general Josh Shapiro told MSNBC’s Rachel Maddow on Wednesday that the state would "protect, secure, and count every vote in Pennsylvania."

"Nothing is going to stop the counting of these legal ballots," Pennsylvania AG Josh Shapiro says. https://t.co/K1kmLBWuto

​Admitting he was aware of the Justice Department's email and ready for the potential consequences, he told the host:

"It is yet another one of the issues we planned for… Nothing is going to stop the counting of these legal ballots in Pennsylvania."

Questioned as to his possible actions if armed federal officials were to arrive at Pennsylvania vote-counting locations, Shapiro said that "what happens is what has been happening since the polls closed: a strict adherence to state law."

State officials have authority over anyone trying to enter locations where ballots are being counted. Anything else is a radical reinterpretation of the law. States can handle elections, and we will ensure the people decide the outcome.https://t.co/etz70G3foQ

The New York Times report citing the purported Justice Department email had come in the wake of Donald Trump’s questioning of vote-counting procedures.

The outlet had written that the email, penned by Principal Associate Deputy Attorney-General Richard Donoghue, "created the spectre of the federal government intimidating local election officials or otherwise intervening in vote tallying amid calls by President Trump to end the tabulating in states where he was trailing in the presidential race." 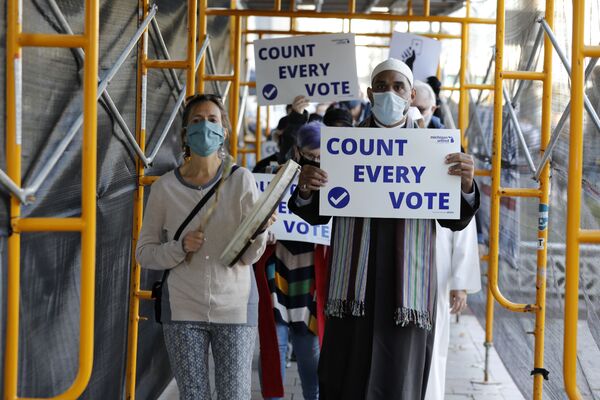 Protestors who want every vote counted from the 2020 presidential election, march down Woodward Avenue on November 4, 2020 in Detroit, Michigan.
© AFP 2021 / JEFF KOWALSKY

Donoghue was reported as saying in the email that although US law prohibits the stationing of armed officials "at any place where a general or special election is held," this "does not prevent armed federal law enforcement persons from responding to, investigat[ing], or prevent[ing] federal crimes at closed polling places or at other locations where votes are being counted."

The Department of Justice's reported interpretation of the law was quickly slammed by state officials and civil rights advocates as “false and dangerous”.

Some suggested the email was a gesture aimed at placating President Trump, who had spoken from the White House on Wednesday night to say:

“Frankly, we did win this election,” adding “we’ll be going to the US Supreme Court… We want all voting to stop,” as millions of ballots were yet to be tabulated.

​Vanita Gupta, president and CEO of the Leadership Conference on Civil and Human Rights, went on Twitter to decry "scare tactics from DOJ."

​Gupta, who served as acting head of the Department of Justice's Civil Rights Division under President Barack Obama also suggested the moves were no more than “posturing”.

There has been no comment from the Department of Justice spokesperson.

The developments come as a clear winner in the 2020 presidential election has yet to be determined, with votes in some key battleground states yet to be counted.

000000
Popular comments
Megalomaniac Zionist Trump is losing it over losing it! LOL 😆