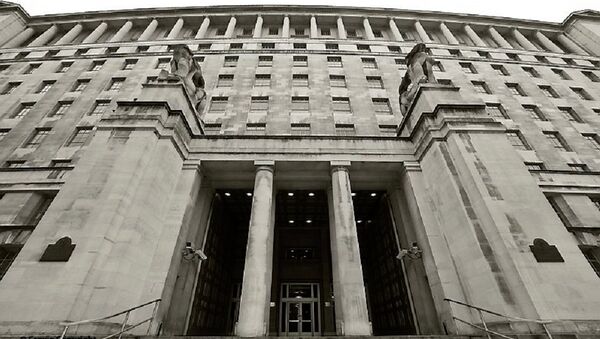 Aleksandra Serebriakova
Moscow-based Sputnik correspondent specializing in foreign affairs.
All materialsWrite to the author
Back in 1993, the management over the design and manufacture of UK’s nuclear weapons warheads was outsourced to private arms companies, and has since been shared between British and American tech giants.

The UK Ministry of Defence will now retrieve control over its the Atomic Weapons Establishment (AWE) site which produces, designs and supports British nuclear weapons, according to a written ministerial statement shared on the government’s website.

For nearly three decades, AWE was managed privately after entering into a “Government-owned Contractor operated arrangement” with Hunting-BRAE back in 1993.

Six years later, a 25-year contract was awarded to AWE Management Ltd (AWE ML) to run the site. It is now operated by a consortium led by Texas-based Jacobs Engineering Group and the UK’s Serco and Lockheed Martin, which own 51% of AWE ML.

Following the government’s re-arrangement, the site will now become an “Arms-Length Body” of the Ministry of Defence but “will continue to be managed by a world-leading team and a new Board will be appointed by the MOD”, Secretary of State for Defence Ben Wallace said.

“The change in model will remove the current commercial arrangements, enhancing the MOD’s agility in the future management of the UK’s nuclear deterrent, whilst also delivering on core MOD objectives and value for money to the taxpayer”, the statement from the ministry reads.

According to the UK government, the decision “was taken in order to simplify and further strengthen the relationship between the MOD and AWE plc” and to enhance the ministry’s ability “to invest in the development of the workforce, technology and infrastructure”.

The United Kingdom was the third country in the world to develop nuclear weapons, following the United States and Soviet Union. Since the 1960s, it has been purchasing US delivery systems to combine them with AWE-developed warheads, the site which is located in Berkshire. The country is estimated to have 215 nuclear weapons in its arsenal.

FreedomRain
4 November 2020, 16:34 GMT
000000
This establishment should be shut down, permanently. UK should not be in the business of developing and manufacturing weapons of mass destruction. We went to war against Iraq for less than that. Such dangerous hypocrisy. Expensive too, we simply can't afford to run in the arms race. We will never be able to compete with the best, who are decades ahead. The best strategic choice is clear - withdraw.
Medvezhonok
4 November 2020, 19:02 GMT
000000
Newsfeed
0
New firstOld first
loader
LIVE
Заголовок открываемого материала
Access to the chat has been blocked for violating the rules . You will be able to participate again through:∞. If you do not agree with the blocking, please use the feedback form
The discussion is closed. You can participate in the discussion within 24 hours after the publication of the article.
To participate in the discussion
log in or register
loader
Chats
Заголовок открываемого материала
Worldwide
InternationalEnglishEnglishMundoEspañolSpanish
Europe
DeutschlandDeutschGermanFranceFrançaisFrenchΕλλάδαΕλληνικάGreekItaliaItalianoItalianČeská republikaČeštinaCzechPolskaPolskiPolishСрбиjаСрпскиSerbianLatvijaLatviešuLatvianLietuvaLietuviųLithuanianMoldovaMoldoveneascăMoldavianБеларусьБеларускiBelarusian
Transcaucasia
ԱրմենիաՀայերենArmenianАҧсныАҧсышәалаAbkhazХуссар ИрыстонИронауОssetianსაქართველოქართულიGeorgianAzərbaycanАzərbaycancaAzerbaijani
Middle East
Sputnik عربيArabicArabicTürkiyeTürkçeTurkishSputnik ایرانPersianPersianSputnik افغانستانDariDari
Central Asia
ҚазақстанҚазақ тіліKazakhКыргызстанКыргызчаKyrgyzOʻzbekistonЎзбекчаUzbekТоҷикистонТоҷикӣTajik
East & Southeast Asia
Việt NamTiếng ViệtVietnamese日本日本語Japanese俄罗斯卫星通讯社中文（简体）Chinese (simplified)俄罗斯卫星通讯社中文（繁体）Chinese (traditional)
South America
BrasilPortuguêsPortuguese
NewsfeedBreaking
08:39 GMTAustralia Trade Minister Looks Forward to Meeting With French Colleagues Amid Sub Deal Row
08:38 GMTVolcano Eruption on Spanish Island of La Palma Forcing Evacuations
08:06 GMTMen Sleep Worse During Waxing Moon, Women Unaffected – Study
07:58 GMTEmmy Awards 2021: Big Winners, 'Hollywood's Most Hated Man' and #SoWhite Controversy
07:30 GMTIndia: Uproar Over Arrest of BJP's Kirit Somaiya in Maharashtra For Accusing Minister of Corruption
07:10 GMTFinnish PM Embroiled in Product Placement Controversy Over Instagram Story
07:05 GMTEight Killed as Gunman Goes on a Shooting Spree at Russia's Perm University
06:27 GMTCanada Set to Deliver Verdict in Testy Vote as PM’s Cakewalk Becomes Nail-Biter
06:17 GMTTaliban Order Women Working in Kabul to Stay at Home, Interim Mayor Says
06:12 GMTSweden Raises Taxes to Finance Largest Military Investment in Modern Times
06:01 GMTBoJo Vows UK’s ‘Ineradicable’ Love of France in Bid to Mend Fences Amid Diplomatic Row Over AUKUS
06:00 GMTBritain Considers Offering Loans to Energy Firms Amid Dramatic Hike in Gas Prices - Report
05:29 GMTRussia’s Ruling Party Ahead in Parliamentary Vote With Over 48%, Election Commission Says
04:34 GMTLive Updates: UK PM Johnson to Push Joe Biden to Lift COVID-19 Travel Ban With US
04:30 GMTNot in the Mood: Golden Retriever Does Not Want to Cuddle
04:28 GMTChinese Observers Give Positive Assessment of Russian State Duma Election
03:45 GMTMusk Adds Another Joke to Joe Biden’s ‘Sleepy’ Issue, When Asked About ‘Inspiration4’ Flight
03:16 GMTKhamenei Appoints New Head of Iranian Air Force
03:16 GMTWait, Again? New Photo of Trudeau Wearing Blackface Emerges on Social Media
02:41 GMT‘Duty of Care’: Texas Doctor Performs Abortion Past 6-Week Law to Protest State’s ‘Heartbeat Bill’