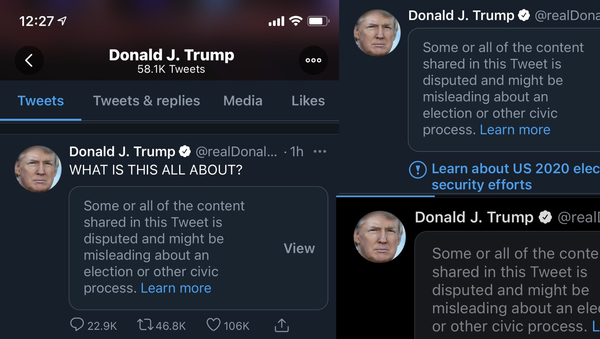 © Photo : Twitter / @realDonaldTrump
Subscribe
Ilya Tsukanov
All materialsWrite to the author
The soft censorship began Wednesday morning, when the president took to his favourite social media platform to express his frustration over alleged discrepancies which saw his early lead in key battleground states evaporate in favour of his Democratic rival Joe Biden.

Twitter has censored four of the eight tweets published by President Donald Trump in the past 12 hours, putting up a disclaimer reading “Some or all of the content shared in this Tweet is disputed and might be misleading about an election or other civic process” next to the content the company found objectionable.

Each of the contested tweets relates to Tuesday’s election results. In addition to hiding the content, Twitter also flagged the president's tweets with a "Learn about US 2020 election security efforts" link outlining the company's standards against what it classifies as false or misleading content.

The first tweet, published by Trump shortly after midnight early Wednesday morning, accuses his Democratic rivals of “trying to STEAL the Election.”

In the second, published about nine hours later, Trump complains about his early election lead “magically” disappearing over the past 12 hours, “in almost all instances [in] Democrat run and controlled” states. Trump calls the situation “VERY STRANGE.”

Last night I was leading, often solidly, in many key States, in almost all instances Democrat run & controlled. Then, one by one, they started to magically disappear as surprise ballot dumps were counted. VERY STRANGE, and the “pollsters” got it completely & historically wrong!

Trump’s next tweet about mail-in ballot dumps was curiously left unscathed. But the one after that, a retweet of a tweet by US comedian Matt Walsh, was again covered up by the social media giant. In the tweet, Walsh linked to a third tweet which has since been deleted said to feature information about an election results update in Michigan that had apparently given Biden “100% of new votes.”

“WHAT IS THIS ALL ABOUT?” Trump asked, now in all caps mode.

The president’s next tweet about Biden votes being “found all over the place – in Pennsylvania, Wissconsin and Michigan” was left in peace.

But the one after that, featuring Trump raging about the Democrats alleged ‘hard work’ to make his “500,000 vote advantage in Pennsylvania disappear” was again flagged.

The president, members of his administration and Republican lawmakers have faced off with Twitter and its CEO Jack Dorsey repeatedly in recent weeks, particularly after the social media giant blocked users from sharing a story about Joe Biden and his son Hunter Biden’s alleged corrupt dealings in Ukraine in the aftermath of the 2014 Maidan coup.

Last month, the Media Research Center, a Reston, Virginia-based content analysis group, reported that it had found that Trump had been censored on Facebook or Twitter 65 times over the past year-and-a-half, while Biden has faced zero instances of censorship against his social media pages.