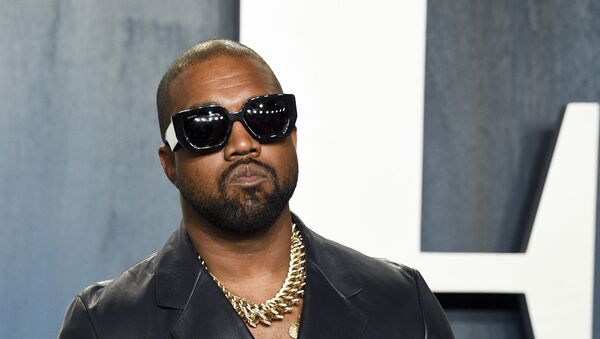 Aleksandra Serebriakova
Moscow-based Sputnik correspondent specializing in foreign affairs.
All materialsWrite to the author
Starring record producer and musician Kanye West set the Twitterverse ablaze during the summer when he announced his intention to run for the White House. The husband of Kim Kardashian was dead serious about his bid, but timing issues landed him on the ballot only in a dozen US states.

Despite some states still counting ballots, one thing was a foregone conclusion: Kanye West did not win the US presidential election. As President Trump and former VP Joe Biden looked to results from key states including North Carolina, Georgia and Pennsylvania, it seemed obvious that the Jesus is King rapper wouldn't be moving to the White House in January, despite millions of his fans potentially hoping for otherwise.

According to polling data, West had actually managed to grab thousands of votes in Kentucky, Mississippi, Minnesota, as well as several other states where he had appeared on the ballot. In some other territories, he had also gathered some support as an independent write-in candidate. But for the majority of the US states, West had missed registration deadline when he announced his intention to run for the presidency in July, which left him with practically zero chance of getting the necessary amount of votes to compete in the Electoral College.

He is not giving up though, hinting that he could try again in four years’ time.

“WELP”, the starring rapper wrote on his Twitter, sharing a pic of his profile in front of the screened election map. The expression is often used to convey disappointment and resignation with how the life goes.

​“KANYE 2024”, West added in caps, sending a clue that the story of his presidential bid is far from over.

And many were happy to hear this news. They also used this opportunity to send some condolences to Yeezy for not landing in the White House in the end.

You’ll get them next time lol pic.twitter.com/2PQ3CdtzLf

As far as we know, there is at least one person who remains an open and devoted supporter of Kanye’s presidential intentions – and this is not necessarily his wife of six years Kim Kardashian. On Tuesday, it was West who had bragged on Twitter about voting for someone he “truly” trusts - meaning obviously himself.

God is so good 😊 Today I am voting for the first time in my life for the President of the United States, and it's for someone I truly trust...me. 🇺🇸 🕊