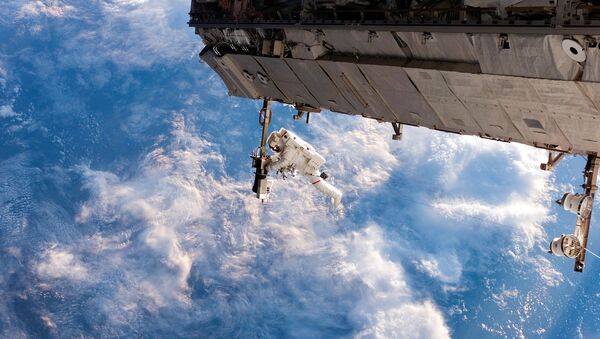 CC0 / /
Subscribe
International
India
Africa
MOSCOW (Sputnik) - A supply of nitrogen and repair materials will be delivered to the International Space Station (ISS) in December that can be used to fully fix the crack in the shell of the Zvezda module, ISS Russian Segment Flight Director Vladimir Solovyov said on Wednesday.

"The cosmonauts covered the crack with a tape. Specialists of the TSNIIMASH research centre and the Khrunichev research centre [both part of the Russian state space agency, Roscosmos] are currently clarifying the cause of the crack and determine the technology for its complete elimination. In December, we will probably deliver nitrogen and sealants to the ISS," Solovyov told Roscosmos' Russky Kosmos journal.

According to the official, the crack was the width of a hair and located in a hard-to-reach spot of Zvezda's shell.

Solovyov did not specify the spacecraft that will deliver the sealing materials to the ISS, but the only one scheduled to fly in December is Cargo Dragon, a reusable freight spaceship of US private company SpaceX. The soonest flight of a Russian cargo spacecraft — Progress MS-16 — has been postponed until December 2021.

A small air leak was first detected at the ISS last September, but increased in intensity only in August of this year. The crew self-isolated in the Russian segment of the space station for several days in order to figure out the source of the leak. Cosmonauts Anatoly Ivanishin and Ivan Vagner eventually found a 4-centimetre (1.5-inch) crack in the so-called transfer compartment in the front of the Zvezda module.