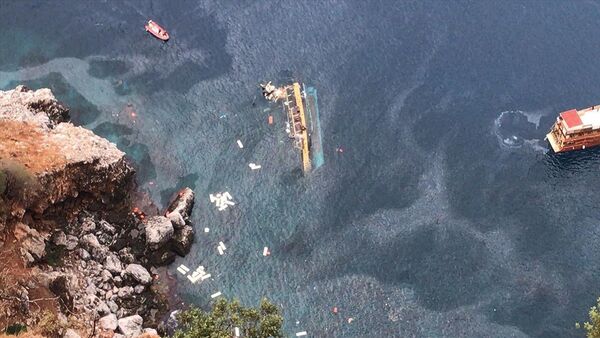 A tourist from Russia died as a result of a boat capsizing in the Aegean Sea 164 feet from Turkey's southern Antalya province, the local Russian Consulate General said on Tuesday.

"According to the Turkish authorities, on November 3, a tourist boat put out to sea for a one-day excursion program. There were 32 foreign tourists on board, including Russian citizens. At about 10 a.m. [07:00 GMT], the boat crashed into underwater rocks near the Alanya fortress and sank. The passengers were promptly taken to a nearby sandbank awaiting rescuers. As a result of search and rescue operations, the body of a Russian citizen born in 1983 was found in the hold of the sunken boat," a spokesperson for the consulate said.

According to the spokesperson, all other passengers are in sound health and have been taken ashore to receive medical attention.

At the same time, according to local media, there were 30 people on board the vessel.

Though it is unknown why the vessel capsized, local newspaper Sabah Gazetesi has suggested that it happened because of bad weather conditions. Turkish law enforcement are currently clarifying the incident's details.