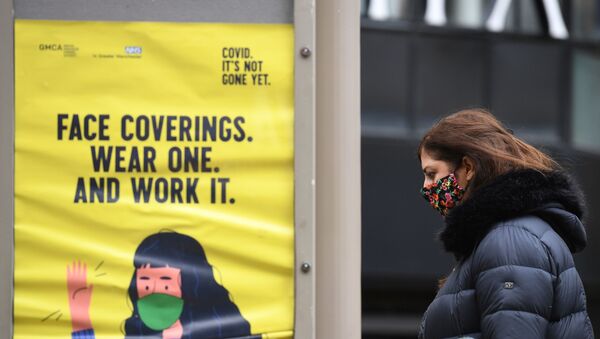 © AFP 2021 / OLI SCARFF
Subscribe
Ekaterina Blinova
All materialsWrite to the author
British Prime Minister Boris Johnson has announced a second nationwide lockdown through 2 December in a bid to prevent the spread of the novel coronavirus. UK observers have explained the potential causes behind the second wave and weighed up the chances of the protest mood increasing within British society in response to the restrictions.

"We're not going back to the full-scale lockdown of March and April, the measures I've outlined are less restrictive", Prime Minister Boris Johnson specified while delivering a speech on 31 October.

The first lockdown began on 23 March and lasted until 10 May when restrictions started to be gradually eased. The second one, which will come into force on 5 November, differs in a certain way, as it will not obligate British schools to close, with playgrounds and parks also remaining open. Furthermore, people will be allowed to leave their home as many times a day as they need for outdoor exercises; funerals will be limited to 30 attendees, while weddings will be allowed only in "exceptional circumstances". Although churches, mosques, and synagogues will be closed for large gatherings, private prayers will be allowed.

What's Behind the Second Wave?

"I think that most people will continue to adhere to the requirements, although there seems to be a steadily growing amount of dissent as the pandemic has progressed, and opposition is likely to continue to grow the longer that restrictions are in place", says Dr Ben Williams, a tutor in politics and political theory at the University of Salford. "Many people have voiced concerns about the impact of this further lockdown in terms of both economic damage and the negative impact on people’s mental health".

The decision to step up coronavirus restrictions followed an upsurge in cases in the UK as well as in the rest of Europe. Touching upon the causes behind the second wave of the pandemic in Britain, Williams remarks that "it is questionable as to how vigorously and conscientiously people have been adhering to the distancing and masking requirements" despite the government's warnings. To date, the UK has registered 1,038,054 COVID-19 cases and 46,807 coronavirus-related deaths.

"Younger people have at times been criticised for not wearing masks as frequently as they should, possibly because they feel less vulnerable to the virus", he notes. "Others who feel it’s an unnecessary restriction of their civil liberties have also objected".

The reopening of schools and universities at the start of September has apparently also contributed to the upsurge in cases, while the reopening of pubs and restaurants in the summer months could also have played a role in the spread of the virus, according to the academic.

"The higher numbers are also the result of greater testing, suggesting that there were a good number of undisclosed cases during the summer which only came to light later", argues David Collins, professor of international economic law at City, University of London, expressing doubts that the current upsurge could really be called a second "outbreak".

It is difficult to say given that this decision was fairly obviously taken for political rather than scientific reasons, according to the professor, who believes that the prime minister "will continue to push for lockdowns as long as they remain popular among influential people, i.e. NHS managers and professionals who enjoy working from home".

In addition to this, the UK will also likely continue to use lockdowns "as long as the international league tables of infections remain a key driving force behind policy": "The UK cannot be seen to take a softer stance than other countries or else it will suffer mercilessly in the press", he notes. 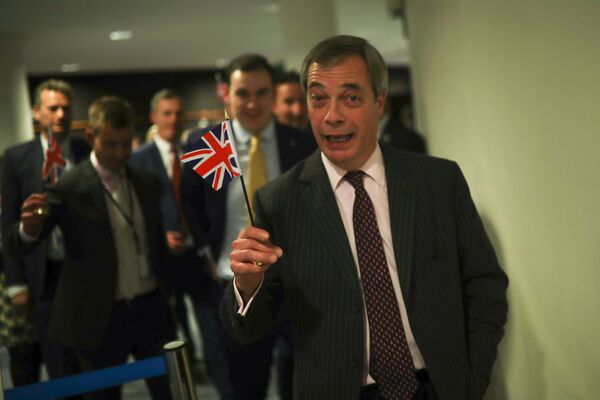 Meanwhile, Johnson's party fellows and British Brexiteers appear to be disenchanted with the prime minister's decision. Former Tory whip Robert Syms and ex-Cabinet minister Desmond Swayne have lashed out at Johnson for allowing himself to be "bounced" into a new national lockdown and denounced the new coronavirus restrictions as "disastrous".

For his part, Brexit Party leader Nigel Farage has announced in his recent Telegraph op-ed that he would fight the anti-coronavirus measures taken by the Johnson government. "On November 5th Boris is blowing up our economy, our liberty and his own legacy", Farage tweeted on 31 October.

"Some Conservative MPs are threatening to vote against the new restrictions, although this will only be a minority position, with most MPs from all parties indicating they will this week vote to support the Johnson government’s position", says Ben Williams. "However, as a reflection of such growing dissent and unrest, the high-profile ‘Brexiteer’ and libertarian politician Nigel Farage is also launching another political party, effectively transforming what was formerly the Brexit Party into the so-called ‘Reform Party’".

British libertarians are calling for returning to some sort of "normal" everyday life and the achievement of "herd immunity" while shielding the most vulnerable members of society instead of implementing the coronavirus measures, which are hitting the British economy, according to the academic.

Following the coronavirus outbreak, the UK has found itself amidst a deepening economic recession and growing unemployment. According to the Office for Budget Responsibility's (OBR) October estimates, the government would have to borrow £372bn for the current fiscal year starting in April 2020 and ending in April 2021. The growing debt burden may prompt the government to further raise taxes, economic observers have warned.

"The government is quite prepared to destroy the economy rather than tolerate any level of spread of infections for this one particular disease to the exclusion of all other ones because it is regarded with such fear by the public", says David Collins.

Unless there is some serious opposition organised within the government, it appears as though there will be COVID lockdowns on a regular basis, he believes.

If the upcoming lockdown lasts beyond 2 December, it is quite plausible that people will openly demonstrate opposition to the government policies, Williams remarks.

"Protests have already happened in other countries, and we have already seen a few in London and other cities in recent months", he says. "The likelihood is that the longer the lockdown is in place in one form or other, the chances of more protest will rise. How the authorities and police will react will perhaps depend on the scale, organisation and size of them".

000000
Popular comments
This is rehashed news. The British government’s policing and security advisers met in London on July 2, their tone was serious Racial and societal tensions, they warned, had reached boiling point in the UK, and the re-imposition of coronavirus lockdown measures could ignite this powder keg and trigger riots unseen since the mass unrest of 2011.