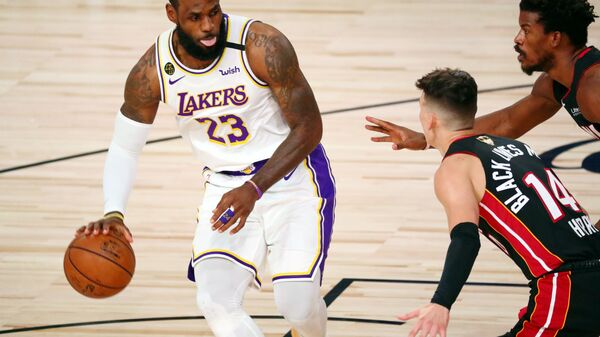 With concerns of voter suppression in key swing states with large African American populations in the US, basketball star LeBron James has been campaigning for greater participation and access to voting opportunities.

The Angeles Lakers star announced his support on Instagram, urging his 74.1 million followers to support Biden and his running mate, Kamela Harris, the night before the November 2020 presidential election.

One more day. Please 🗳!! We need EVERYTHING to change and it all starts tomorrow. #BidenHarris #MoreThanaVote

James' endorsement followed a Trump rally in Pennsylvania where the president addressed his supporters in the swing state.

“How about basketball? How about LeBron? I felt badly for LeBron. I felt very badly. Down 71% and that's for their championship -- I didn't want to watch one shot,” Trump said, in reference to the National Basketball Associations’ collapsing championship ratings. “When they don't respect our country, when they don't respect our flag, nobody wants to watch. Nobody!”, Trump stated.

LeBron James opened his own school which gave struggling children access to an education. Trump university had to pay a $25 million settlement for defrauding students. https://t.co/ZHDmLW1594

​James, who campaigned for Hillary Clinton in 2016, has been an adamant opponent of Trump and, despite starting the 'More Than a Vote' campaign this year, has so far fallen short of overtly endorsing the Democratic ticket, until now.

This isn't the first time that Lebron James found himself facing criticism over his 'More than A Vote' campaign, which seeks to oppose voter suppression in target states such as Florida, Georgia, Michigan, North Carolina, Pennsylvania, Texas, and Wisconsin.

He was accused of hypocrisy after describing NBA President Daryl Morey’s support for Hong Kong protesters - leading to the association's games being taken off the air in China - as “misinformed" on the subject.

Anti-Beijing activist Joshua Wong accused the 4-time MVP of only caring about money, for pushing for greater democracy in the US and not in China - of which Hong Kong is an administrative region.

Last year, US Vice President Mike Pence accused the NBA of “acting like a wholly owned subsidiary” of the Communist Party of China. The NBA stated that Morey's comments were "regrettable".