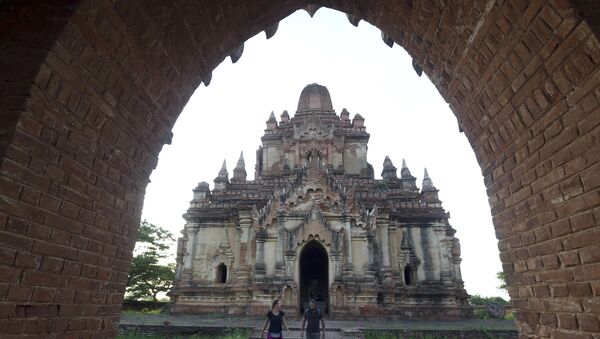 “I wouldn’t say that there is a heightened risk of Rohingya taking up arms in larger numbers as long as the international partners are engaged with Myanmar on the issue,” the academic said, responding to a question from Sputnik during a panel discussion on the Myanmar elections on Monday. The webinar was organised by a publicly-funded Indian think tank, the Indian Council of World Affairs (ICWA).

Myanmar’s neighbours such as Bangladesh, home to the world’s largest refugee camp in Cox’s Bazar, and India have expressed concerns over Rohingya refugees joining the ranks of militants. Bangladesh’s Prime Minister Sheikh Hasina has even called 1.1 million Rohingya refugees hosted in her country a “national security threat” and has been calling for their repatriation.

Kipgen, however, said that there would be no homecoming in the near future for Rohingya refugees currently lodged in Bangladesh.

“They (Rohingya) are not accepted as citizens of Myanmar by the Buddhist majority community, which comprises two-thirds of the population. Support for Suu Kyi’s NLD (National League for Democracy) is strong among the majority of community members living in the regions,” the expert explained.

Kipgen also reckoned that Rohingya refugees and their international partners must now look beyond repatriating the members of the persecuted minority in their native Rakhine state, where the community members have found themselves entrapped in the crossfire between the security forces and the militant groups.

“Other countries must now think of integrating the Rohingya refugees in their host countries. There should be resettlement in neighbouring and Western countries under the United Nations High Commissioner for Refugees (UNHCR) norms,” suggested the analyst.

“We can be certain of the fact that all the Rohingya refugees are not going to return to Myanmar. Even if some of them do, it is going to take time,” Kipgen said.

He further underlined that Myanmar’s economic growth had slowed under Suu Kyi since she helped her National League for Democracy (NLD) clinch comfortable majorities in both the House of Representatives  (lower house) and House of Nationalities (upper house) in the 2015 elections.

“This could lead her to outsource Myanmar’s economic recovery to China in the coming days. Making peace with the warning ethnic groups in the country’s northern and eastern regions and boosting economic growth have been her two major poll planks,” remarked Kipgen.

China had been the biggest foreign investor in Myanmar from 1989 through 2011, according to the Ministry of Investment and Foreign Economic Relations (MIFER). While Singapore narrowly outperformed China in terms of its investments into the country last year, Kipgen noted that Beijing was most likely to regain its top spot as the Chinese economy was among the few that had registered economic growth in the post-COVID-era.

“The Western nations’ perspective of Myanmar has been affected by Suu Kyi’s handling of the Rohingya crisis and her defence of the military at the International Court of Justice (ICJ) this year,” said Kipgen. The case against Myanmar was brought to the ICJ by the African nation of Gambia and is under judicial consideration. Significantly, twenty-five percent of seats in Parliament are reserved for military personnel, who also occupy key portfolios such as defence and border affairs.

“Investments have taken a hit in recent years, with China emerging as the biggest saviour of Myanmar on the human rights and the economic front,” argued Kipgen.

“Despite her failure to get all the ethnic groups on board, a majority of voters still believe that she is the best person to conclude the peace process,” he also highlighted.

Ambassador Gautam Mukhopadhyaya, India’s former envoy to Naypyidaw, recounted during the discussion that Suu Kyi had been able to get only two ethnic groups on board the nationwide ceasefire that had been initiated in 2015.

“Eight of the 15 armed ethnic groups had signed the ceasefire agreement in 2015. Only two more groups have got on board since. The process is still incomplete,” noted the ex-envoy.

The Indian envoy further underlined that China’s backing was important in concluding the peace deal, owing to Beijing’s influence with some of the ethnic armed groups, with many training camps said to be located in Yunnan province near the border.

Suu Kyi all set for another term

All the members on the panel were unanimous in predicting a second term for the Nobel Laureate-turned-state counsellor, claiming that her vote share could be as high as 70 percent this time around.

However, Burmese activists also note the trend of “authoritarian tendencies” taking root in the south-east Asian country due to the NLD’s policies.

“Her role has been a huge disappointment in many respects, but especially in the cause of advancing democracy. The NLD has staffed the country’s major organisations, including government human rights and election bodies, with their loyalists. They are on the government's payroll. They won’t give up power so easily,” said Khin Zaw Win, the Director of the Yangon-based Tampadipa Institute.

He lamented that just two Rohingya Muslim candidates had been allowed to file their nomination to contest the upcoming vote. “Many of them have been disqualified on flimsy grounds. There is not a single Rohingya candidate from the ethnic regions,” he pointed out.

Several human rights groups have described the elections in the country as “fundamentally flawed” for discriminating against minority candidates.