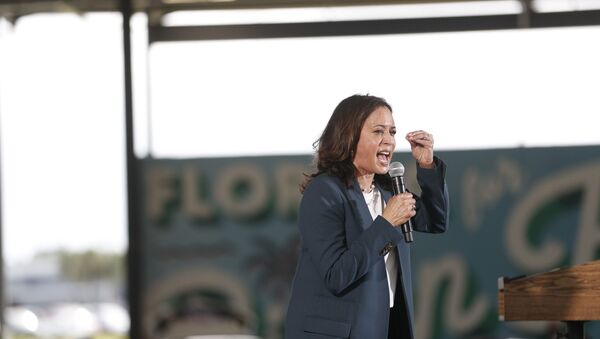 Indians have remained upbeat throughout the US Presidential election campaign; Democrat Joe Biden has picked Senator Kamala Harris, whose mother was Indian, as his vice-presidential candidate. Democrats hope that Harris woo voters among the Indian-American diaspora community of nearly four million.

As the battleground is set for one of the most important US elections, held in the middle of the devastating COVID-19 pandemic, a group of Indian villagers prayed for the victory of Democratic vice-president candidate Kamala Harris thousands of miles away, in the state of Tamil Nadu.

Scores of people gathered at the temple in Thulasendrapuram village in Tamil Nadu, Harris’s maternal grandfather’s home, and offered special prayers for her victory.

Tamil Nadu: Special prayers offered at a temple at the native village of US Democratic vice presidential nominee Kamala Harris in Tiruvarur district wishing success for her in the upcoming US Presidential polls.

"We want her to win the polls, we're praying for her," says a local pic.twitter.com/4TWixk9KcI

The organisers of the event erected hoardings of the vice-presidential candidate in the village and also offered sambar idli, Harris' favourite Indian food, to worshippers.

It is a special day for residents of #Painganadu , where #KamalaHarris ancestors lived. Special poojas are lined up through the day for the victory of #Kamala in #USPresidentialElections2020 . The VP nominee's grandfather P V Gopalan hailed from the village. @DeccanHerald pic.twitter.com/1rY7t4pn4r

The majority of people gathered to pray for Harris have never seen her in person, but that is not the concern for the villagers, who take pride in the fact that Harris' mother Shyamala Gopalan was from their village.

The senator has time and again spoken about her Indian and Jamaican roots during her campaign, winning her favour with African-American and Indian-American voters.

Election day kicked off on Tuesday in the US state of New Hampshire, where the first ballots were cast at polling booths. A record number of people have already voted ahead of Election day - 3 November, via mail-in ballot amid the ongoing coronavirus pandemic.

Harris would become the first female vice president in US history if Democratic challenger Joe Biden wins the election against Republican rival President Donald Trump. Harris is one of only three Asian-Americans in the Senate and the first partly Indian-American Senator.